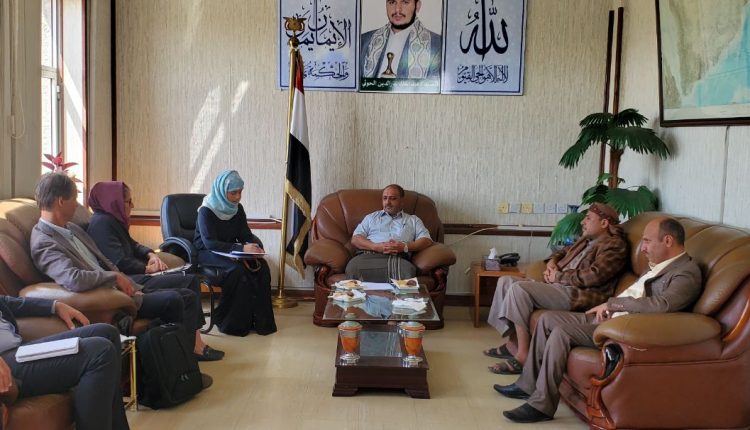 The Secretary-General of the Supreme Council for Management and Coordination of Humanarian affairso and International Coordination,Ibrahim Al-Hamali, discussed today with the head of the ICRC Mission,Katrina Reten, the activities of ICRC in Yemen.

The meeting, which was attended by the head of the planning department Faisal  Modehash and head of international cooperation Ali Al Kahlani and Vice-Chairman of ICRC Gregor Moore, addressed the humanitarian and medical interventions and priorities of their interventions as required by the current situation.

Al Hamali indicated to the positive outlook that the Yemeni people have toward ICRC,appreciating
the efforts and cooperation of ICRC through their various interventions, according to the difficult situations of the Yemeni people as a result of aggression and siege.

He pointed out to the aggression’s crimes against civilians such as what happened the prison of Saada Governorate, which was among the known places for ICRC as well as ICRC visited the site more than once and know that it was a purely civil place.

Al-Hamali indicated to the recent threats of the coalition by targeting government Ministries and facilities alleged to be used for military purposes, while ICRC and the organizations working in Yemen know well that such ministries and institutions are fully civilian and away of any military actions, stressing that this threat requires severe measures and pressure that ends with protecting and neutralizing civilians from any targeting that causes suffering to them of any kind.

He explained that unless the ICRC has taken clear positions towards obvious violations which is as a core of its functions, however, how can be depended on it and other humanitarian organizations to suspend aggression and raise the siege.

He stressed the importance of strengthening cooperation and coordination between SCMCHA and ICRC, stressing SCMCHA’s keenness to facilitate the work of ICRC and overcome the difficulties that may be objected to carrying out its tasks .

In turn, the head of ICRC has confirmed that the Committee will spare no effort to alleviate the suffering of the Yemeni people as a result of the situation and the great humanitarian crisis.

She noted the nature of the work of the Committee, which adopted an independent bilateral speech approach, stressing that the Committee had taken action more than just binary communication in a number of violations, the last of which had been conducted on prison  of Saada as well as issued a report about that .

She explained thatICRC regrets any targeting of civilians and would discuss with the other party violations affecting civilians and threatening to target ministries and institutions that are of civilians objects protected by the provisions of international humanitarian law.

She appreciated SCMCHA’s efforts on overcoming and facilitating the work of ICRC and organizations working in Yemen in all humanitarian areas.

The meeting was attended by assistant of head mission Fatima Al-Yamani and the Coordinator of Human Relations of ICRC , Ralph Wahbi and the Director General of International Organizations of SCMCHA Turki Jamal .

A meeting in Sana’a to discuss the situation of childhood in Yemen.

The Secretary-General of the SCMCHA meets the Regional Director of UNOPS.