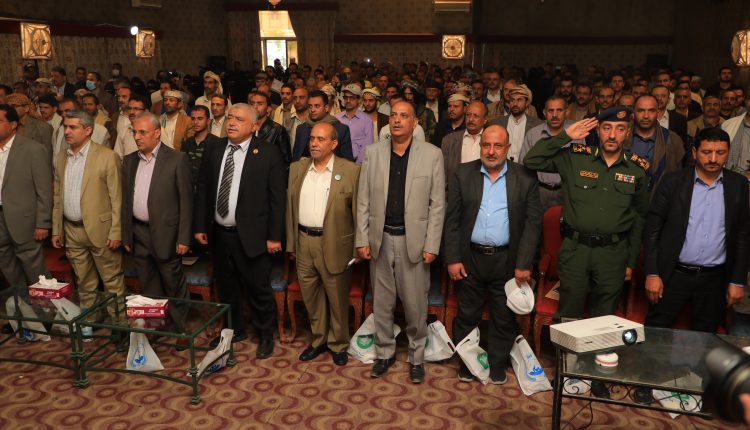 The Supreme Council for the Management and Coordination of Humanitarian Affairs and International Cooperation celebrated today the seventh anniversary of the September 21 revolution with an artistic oratorical event in Sana’a.

At the celebration, Deputy Prime Minister for National Vision Affairs Mahmoud Al-Junaid confirmed that the Yemeni people accomplished on the 21st of September a revolution that derived its strength from God and the approach of Qur’an, explaining that the events of Yemen and its revolution revealed the falsehood of the arrogant world, its claims and organizations’ concern for human rights.

He stated that Yemen lived through a period of dependence, tutelage, and submission to external domination, with the presence of forces and centers that tampered with the political decision, which increased the consideration of Yemen as an arena for regional and international interactions, pointing to the difficult phase that Yemen experienced, represented by the occupation of institutions and the provision of the space for the American ambassador and others to move from one place to another to meet with the sheikhs and Yemeni characters.

Al-Junaid touched on the suffering of the Yemeni people from conflicts and internal fighting , including the six Sa’ada wars and the intend to break up the southern governorates.

“This situation necessitated the release of Yemeni people from the chaos that prevailed at the time, and the revolutionaries moved to the squares, realizing where they were heading, so the revolution took place to get Yemen out of dependence and move it towards freedom and independence,” he said.

He added, “Today we are moving, whether in state institutions or on the fronts, out of the realization that the global forces of influence wanted to abort the revolution, and the movement of people to the fronts came from the strength of the people derived from the power of God and thanks to him the confrontation took place and the aggression and its might was defeated.”

The Deputy Prime Minister affirmed that Yemen today is on the path of construction, development, advancement of capabilities and correcting and reforming the imbalances of state institutions.

Al-Junaid concluded by saying, “We will prove to the world, within the framework of the national vision, that the Yemeni people are able to rise and confront.”

In turn, the Secretary-General of the Supreme Council, Abdul Mohsen Tawoos, drew attention to the distinction of the September 21 revolution from other revolutions of the Arab Spring, which failed because they were artificial revolutions by the United States, and Washington exploited the anger of the peoples to make new agents for them, and this was not the case in Yemen. 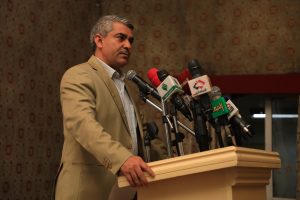 He stated that the Yemeni revolution differed because its base was an extension of the launch of the martyr leader in 2001, and its distinction was the elimination of symbols of corruption and the expulsion of Yemen from American tutelage and dependence, so it became the only country that says no in the face of America .

Tawoos said: People are betting today on the revolution of Yemen, as it is for all the free people of the world, and employment for America can only be ended by an act like the Yemeni revolution,indicating that the September 21 revolution brought together all Yemeni parties and was not a qualifying revolution.

He stressed that Yemen deals with donors and organizations out of respect for the country’s laws and sovereignty, calling on organizations to be neutral and to act as a humanitarian party.

He added, “We ,in SCMCHA,will seek to direct all support in favor of sustainable projects, and the orientation should be towards sustainable development and serving the people.”

The celebration included a poem by the poet Moaz Al-Junaid and an artistic operetta, the contents of which dealt with the Yemeni people’s march towards independence, the rejection of dependence through the political and revolutionary stations until September 21, and their steadfastness in the face of aggression and military industrialization.

Al-Hadi and Tawoos inaugurate projects in Hamadan with more than $236,000 .

SCMCHA condemns the burning of a copy of the Holy Quran in Sweden.

Al-Hamli meets the new head of ICRC mission in Yemen.