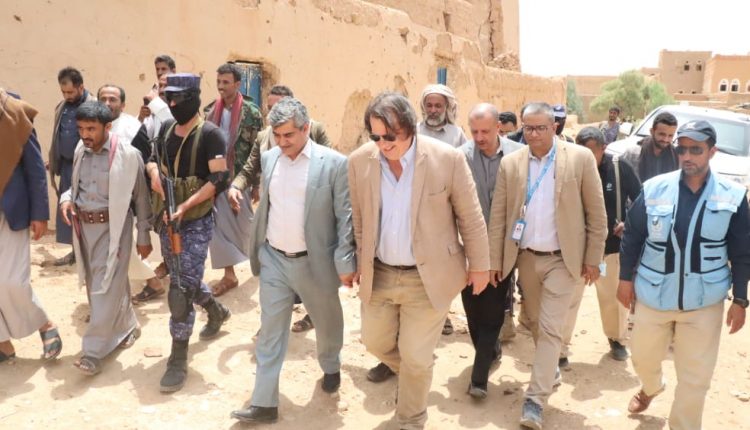 This came during his visit today to the governorate,the Governor of Al-Jawf, Faisal bin Haider, and the Secretary General of the Supreme Council for the Management and Coordination of Humanitarian Affairs and International Cooperation, Abdul Mohsen Tawoos, told the UN coordinator the needs of the Al Hazm General Hospital Authority in terms of medical devices and cadres.

The UN official expressed his astonishment at what he witnessed of the great suffering of the local population, stressing the importance of concerted efforts to alleviate their suffering.

The Governor of Al-Jawf indicated the importance of cooperation and support of humanitarian organizations to implement relief and development projects for the governorate, as it lacks the simplest projects, pointing to the suffering of citizens as a result of the continuation of the aggression and the repercussions of the siege and the extent of the destruction left by the aerial bombardment of the aggression on infrastructure, homes and farms of citizens.

In turn, Tawoos expressed the council’s readiness to provide all facilities for organizations to expand their activities in the governorate, in a way that contributes to alleviating the suffering of citizens as a result of the aggression and siege.

The visit were accompanied by the director of SCMCHA in the governorate, Khaled Shaja.

Tawoos and Haidar inspect the damage extent and citizens’ suffering in a number areas of Al-Jawf.

Distribution of tents for IDPs and affected people the floods in Darwan in Sana’a.

Discussing ways to provide the needs of Al-Bayda University.