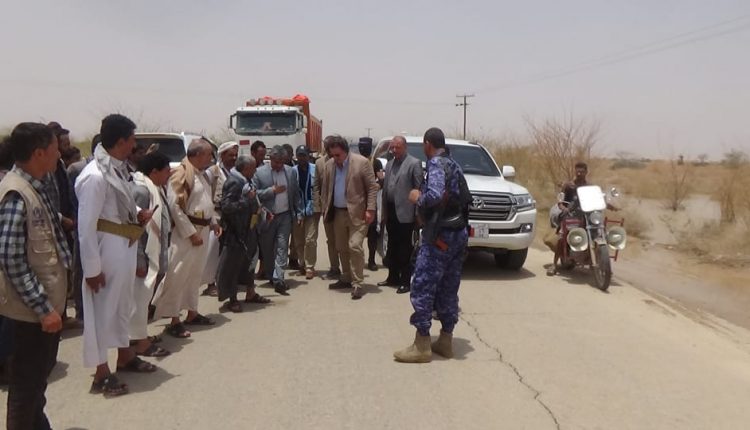 Tawoos and Haidar inspect the damage extent and citizens’ suffering in a number areas of Al-Jawf.

Al-Jawf Governor Faisal Ahmed Haidar and The Secretary General of the Supreme Council for the Management and Coordination of Humanitarian Affairs and International Cooperation, Abdul Mohsen Tawoos, inspected today a number of areas affected by the shelling of the aggression in Al-Ghail district.

Haidar and Tawoos,in the presence of the UN Resident Coordinator for Humanitarian Affairs “OCHA” in Yemen, William David Gresley, were briefed on the extent of the damage to the areas of the Al-Ghail district as a result of th aggression led coalition raids which resulted to displacement of dozens of families.

They visited the Eastern Al Rowth project in Al Khalq district and the Peace Bridge, which links the provincial center with the Al-Ghail and Al-Khalq, which were affected by the floods.

Tawoos confirmed SCMCHA will work to provide humanitarian needs of governorate and facilitate the return of IDPs who want to return to their areas.

He explained that humanitarian organizations reduced their projects in the province after their liberation, despite the facilities provided by the rescue government.

Tawoos indicated the importance of joint cooperation to clear mines from the province’s areas.

For his part, the Governor of Al-Jawf expressed the readiness of the local authority to provide facilities and cooperation in working to alleviate the suffering of citizens.

The UN Resident Coordinator of OCHA, stressed the importance of creating an appropriate environment to help humanitarian partners be present in Al-Jawf governorate after resolving the demining problem.

The visit was accompanied during by The Director of SCMCHA Branch in the province Khaled Shaja.