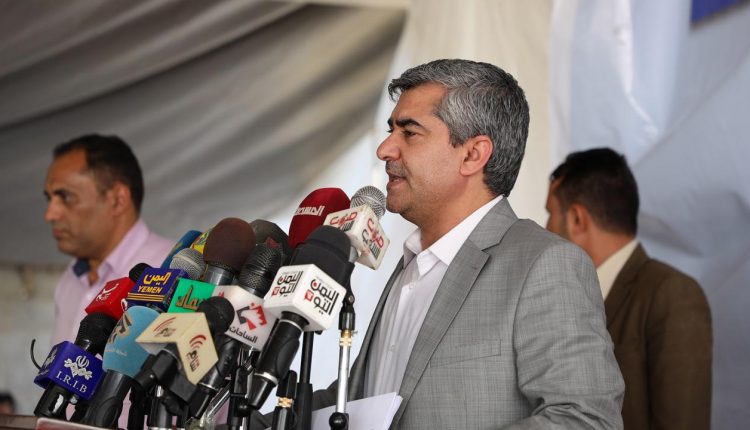 The Republic of Yemen remains a good land that spreads peace
to all parts of the world and for all humanity..
The Yemenis have remained at the forefront of the advocates of peace, and human civilization they have provided at various stages of history a leading model of peaceful coexistence through their cohesive society against all forms of racism and hatred, seeking to spread the principles of tolerance and acceptance of the other, thus pursuing in its international relations the highest principles of cooperation that will preserve international security and peace by promoting mutual respect between states on the basis of equality, respect for sovereignty and non-sovereignty ,avoid intervantion of inner Affairs, unused of force or threats against any other country .
Yemen’s relationship with all parties of the international community has continued for thousands of years, presenting Yemen with a picture of one of the finest societies known to humanity.

26 March 2015 marks tragic spot in various humanitarian fields ; social, political, economic and cultural aspects, given tstarting with the violation of Yemen’s sovereignty and interference in its internal affairs by USA and Saudi aggerssion targeting Yemeni territory militarily with various weapons, including weapons and ammunition, which are internationally prohibited that organized to kill and displace civilians, destroy their public and private property, in addition to occupying a number of provinces, islands, regions and the legalization of all capabilities , as well as dismantling the Yemeni soceity with the continuation of the total blockade on various land ports and Yemeni seaports as a whole, which has resulted in a worst humanitarian crisis that is heading towards total collapse.

The tragic and worsening humanitarian disaster that Yemenis have been experiencing for six years has required swift and urgent intervention by the United Nations and international organizations to fulfil its humanitarian role in providing humanitarian assistance and relief and to play its role seriously, impartially and professionally in accordance with the relevant international laws that have organized and entrusted that task with that humanitarian responsibility.

In regards to the negative role of many leading donors and participants in the aggression against the Yemen, who are the main cause of this crisis, we have not seen any interaction by donors and the UN to cover the major gaps in the vital and essential sectors, where donor pledges have not reached 50% for what united nations needs to stop the greatest famine in history and provide the most prominent food and pharmaceutical needs .

In regard of these humanitarian and relief organizations role towards Yemen and painful humanitarian reality caused by the aggression and the blockade resulting crimes and the severe damage done to civilians and the livelihoods of civilians in general.

On the other hand, the negative attitude of the United Nations system, represented by all its agencies concerned with monitoring and evaluating the humanitarian situation in Yemen to contribute directly of increasing the suffering of Yemenis, as its positions were limited to a number of media descriptions, most recently mentioned in the donor conference on March 1, 2021, in which UN Secretary-General António Guterres explained that

1- “Two out of three people in Yemen need food assistance, health care or other life-saving support from humanitarian organizations. More than 16 million people are expected to go hungry this year. Nearly 50,000 Yemenis are in brink of famine. 4 million people across Yemen forced to flee their homes”

2. “Starving children are more likely to develop preventable diseases such as cholera, diphtheria and measles. Every 10 minutes a child dies unnecessarily because of such diseases in Yemen. Every day Yemeni children are killed in the conflict. “The war is swallowing up an entire generation of Yemenis, the war must stop.”

3. “This year we need $3.85 billion to support 16 million Yemenis on the brink of collapse. I appeal to all donors to respond our call generously today to stop the famine that is ravaging the country,”

David Gresley, UN Humanitarian Coordinator for Yemen, explained on his speech that:

1. “Yemen reaches the point of no return. If we make the wrong choice now, what will come next will be the biggest famine in generations.”
2. “Famine is making its way to Yemen, if we do not raise the level of relief operations quickly, it will be spread in all people and peace will be meaningless if lives are lost.”
3. “If the world chooses not to help at all or not to help enough, we are wasting the opportunity to stave off famine and take steps towards peace, and we will make mass famine certain, thereby undermining the prospects for peace.”

Nevertheless, we have not seen or seen serious action by the United Nations to stop the aggression against Yemen.
Despite the spread of the Coved 19 pandemic and the resulting continuing blockade of oil, food and medicine imports, which called for further efforts to strengthen the coverage of gaps in these vital sectors.
In contrast , number of measures have been taken to exacerbate the humanitarian situation in Yemen, including:

1- Reducing the World Food Program for periodic food distribution to 50% from April 2020 in the provinces under the administration of the Supreme Political Council, which means the use of food as a political and military paper away from humanitarian considerations.

2. A number of UN organizations suddenly withdrew from their health services from hundreds of health facilities without sustainable solutions, which almost led to the collapse of the health situation.

3- Reducing/stopping fuel needed to operate water and sanitation institutions and health institutions, while not taking a mechanism for sustainable solutions within the projects implemented in the past years.

In regard to all of the above, the humanitarian situation in Yemen continues to deteriorate due to many reasons, most notably:

1- The lack of seriousness of the United Nations in working to stop the aggression against Yemen, don’t separate between humanitarian issues and political and military issues.
2- Donors fail to meet their obligations.

3- Not to focus on sustainable development programs.

4. Large amounts of grants to humanitarian partners in the main donor offices have been deducted.

5- Calculating grants and pledges in kind, so that purchases are made from external contractors and in large amounts, without involving the national side in supervising and controlling those operations.
The introduction of food and sanitary items in kind is nearing expiration due to the bureaucracy in procurement and the deliberate delay in the introduction of these items through the port of Hodeidah.

In order to enhance the correction of humanitarian work, SCMCHA has many measures, most notably:

3- Review and analyze projects submitted by humanitarian partners and adjust their budgets according to the mechanism adopted by SCMCHA in order to ensure that direct expenditures reach a minimum of 60% of the total budgets, and these direct expenses are up to the beneficiaries directly with the adoption of 20% as support expenses and not more than 20% as operating expenses.

5- Reducing projects that do not directly serve the priorities of needs turning them into targeted development projects or stopping them.

7- Cooperation and coordination with the relevant authorities to follow up and evaluate the projects implemented and identify problems in them, and work to avoid the causes of these problems in the future.

Below is a summary of humanitarian needs priorities 2021.

24.8 million person (67% of the population) need food assistance.
16.5 million person the third phase or more in the integrated classification phase during 2021.

5.1 million people are one step away from famine (the fourth phase
of the Integrated Food Security Phase Classification ).

70% of the population suffers from noncommunicable diseases.
2,700 health facilities in need of support to provide health and obstetric services.

It is estimated that 16.4 million people in free provinces are in need of assistance in water and environmental sanitation, of whom 10 million are in dire need.

Over 2,500 (university, institute, school) have been completely or partially destroyed.

Approximately half a million educational staff suffer from salary cuts.

More than half a million students are in dire need of emergency assistance.
1 million displaced children in need of education support.

58% of displaced families, the host community and those affected live in cold areas.

Tens of thousands of martyrs and wounded from civilians .

The catastrophic humanitarian c consequences of the closure of Sana’a airport:

Tens of thousands of cancer patients,including a large number of children and women, are at risk of death.