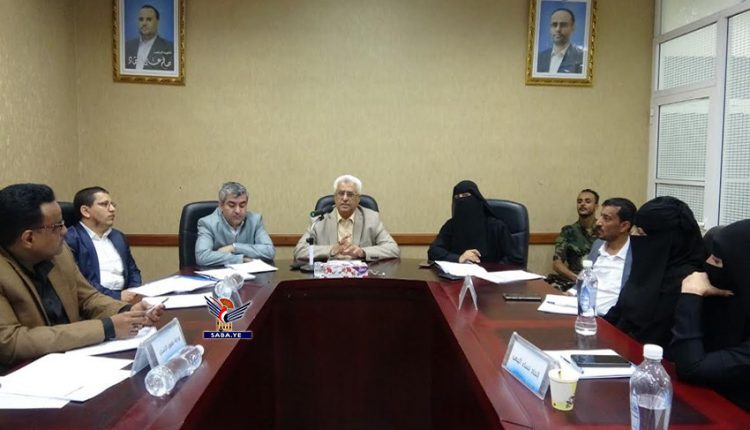 Today at its meeting, the Technical Committee for the Promotion of the Child Justice System, chair by Justice Minister Nabil Al Azzani, discussed issues related to children and the extent to which children are exploited in crime.

The meeting, which included Justice Minister Nabil Al-Azzani and The Secretary-General if SCMCHA, Abdul Mohsen Tawoos, reviewed the extent of community awareness of the dangers that children are exposed to , which contributes of protect them from getting into crime.

At the meeting, The Minister of Justice al-Azzani pointed out that the finding of children cases in judiciary concerning children in contact with the law is offset by a lack of community awareness of its seriousness, which necessitates the need to implement awareness programmes to reduce child delinquency, which is the role assigned to the Technical Committee by conceptualizing awareness activities on a larger scale as well as activating the role of the media in this regard.

Al-Azzani pointed to previous understandings with SCMCHA in this regard, Stressing the ministry’s keenness to unify visions and concepts with SCMCHA leadership as a way for managing and coordinating funding, including the activities of the Committee to strengthen the system of children’s justice in contact with the law.

He appreciated cooperation of the Secretary-General of the Supreme Council for the Management and Coordination of Humanitarian Affairs Abdul Mohsen Tawoos regarding the activities of the Technical Committee for the year 2021 and coordination at the local and international levels to support its activities.

Al-Azzani also confirmed the importance of starting from the recommendations of the meeting of senior leaders of the children’s justice actors in contact with the law, and the plan of the Technical Committee of this year, which includes the activities of all members of the committee, which was based on the achievements achieved over the past years.

For his part, The Secretary General of the Supreme Council, Abdul Mohsen Tawoos, addressed SCMCHA’s efforts in managing and coordinating grants at the national and international levels.

Tawoos confirmed the importance of the outputs of the activities, meetings and programs of the Technical Committee are clear and chronic in a way that ensures its effectiveness and build on what has been achieved in hierarchical manner.

He pointed out the need to focus on activities with a tangible impact that translate the needs arising from practical reality, particularly the establishment of juvenile justice complexes in the provinces, and the center of forensic medicine in light of the Republican decision to establish it

Tawoos also confirmed that SCMCHA is ready to cooperate with the Technical Committee in coordination to provide funding for the implementation of its activities in accordance with the plan established this year under the Ministry of Justice within the framework of the technical committee, which includes representatives of a number of governmental and non-governmental agencies related to the child justice system with the law.

He indicated the importance of focusing on activities which have an impact on the needs arising from practical reality, particularly the establishment of juvenile justice complexes in the provinces and the forensic center in the light of the Republican decision to establish it.

The head of the Technical Committee for the Promotion of the Child Justice System, Amal Riachi, reviewed some of what had been achieved during the previous period and highlighted the challenges she faced.

She stressed that community awareness is a key pillar for publicizing the risks of child delinquency, and one of the most important priorities of the committee’s plan for current year.

During the meeting, which was attended by members of the Technical Committee, statistics of childern issues over the past years and the damage to the child justice system caused by the aggression against Yemen were reviewed

After its suspension … UNICEF apologizes to the SCMCHA for the aids that promote Israel and Britain.