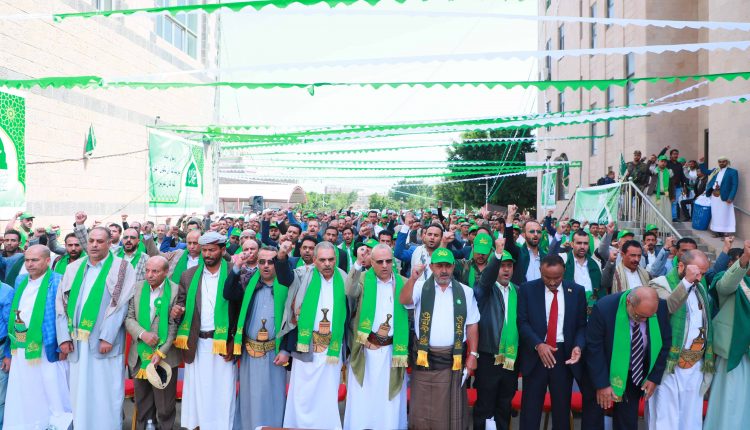 Amid a large presence,SCMCHA holds a celebration of the Prophet’s birthday

The Supreme Council for the Management and Coordination of Humanitarian Affairs and International Cooperation, the Executive Office of the National Vision Department, the Ministry of Planning and the Central Statistics Organization, organized today in Sana’a a festive event on the occasion of the Prophet’s birthday.

In the celebration,which was attended by a number of officials and social leaders amid a large public presence, Deputy Prime Minister for National Vision Affairs Mahmoud Al-Junaid confirmed that the Yemenis’ association with the Messenger of God, may God bless him and his family, strengthened their steadfastness against aggression and siege.

He pointed out the importance of this great occasion in Yemeni people’s hearts and the Islamic nation, because it represents an educational station to draw lessons from the biography of the beloved Prophet, and his positions of faith.

Al-Junaid pointed out that the celebration of the great religious occasion by the Yemeni people reinforces adherence to the authentic Muhammadan approach, and the expression of joy and happeness on the anniversary of his birth, peace be upon him and his family.

He pointed to the necessity of celebrating of  the Prophet’s birthday , talking about his morals, values ​​and his fragrant biography, linking them to the nation’s reality today and making it an educational station to enhance loyalty and love for the Prophet.

For his part, the Secretary-General of SCMCHA, Ibrahim Al-Hamli, pointed out the importance of commemorating the birth of the Prophet, as it is a valuable opportunity and an important station to recall responsibility, and to remind God’s mercy and grace over all of humanity.

He pointed out that the anniversary of the birth is a starting point for the consolidation of the divine principles and faith identity, with what it means to belong to Islam in terms of practical and behavioral commitment and civilizational renaissance.

Al-Hamali explained that the anniversary of the birth of the greatest Messenger comes to recall the common denominators, the common word, and the unifying foundations of the nation, which are united by its affiliation to Islam and to the Messenger of God.

For his part, Minister of State Dr. Hamid Al-Muzjabi affirmed that Yemenis have been closely associated with the Messenger of God since the dawn of Islam.
He pointed out that reviving this occasion is a veneration for the teacher of humanity, the elite of humanity and the ideal of perfect creation, Muhammad.

Al-Muzjabi reviewed the conquests and sacrifices made by Yemenis in order to defend truth and religion throughout history, as well as their role in spreading Islam in various parts of the globe and their adherence to the approach, behavior, values ​​and morals of the beloved Mohammed and its practice in dealing with others.

The event was attended by a number of members of the House of Representatives and the Shura Council, leaders and employees of the organizing agencies, chanting paragraphs and poems expressing the occasion.

Al-Hamli inaugurates project to rehabilitation project of the main street in Taiz, at a cost of $900,000