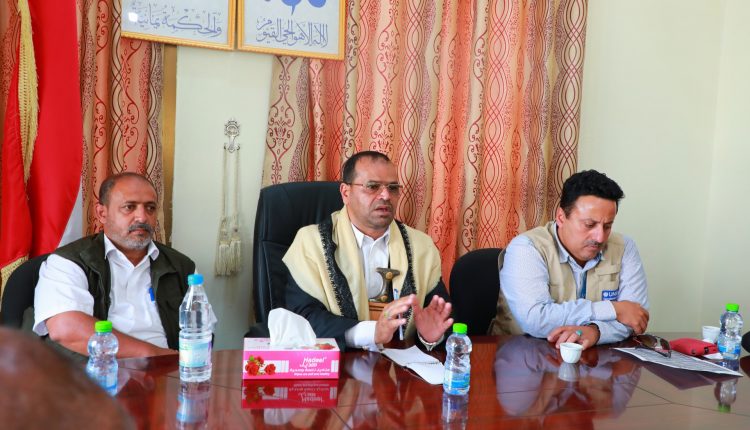 The Governor of Saada, Muhammad Jaber Awad, and the Secretary-General of the Supreme Council for Humanitarian Affairs and International Cooperation, Ibrahim Al-Hamli, discussed with the programs Director of UNPOS, Khaldoun Salem Saleh, UNPOS the projects to be implemented in the governorate in partnership with the local authority in the service sectors.

The meeting, in the presence of the governorate’s agents, reviewed the projects implemented by UNPOS during the past years, as well as the projects to be completed in the areas of water, sanitation and health, including sanitation projects for the governorate center and the restoration of the installation of a solar energy system for the Republican General Hospital Authority in Saada and lighting the city of Saada.

At the meeting, Governor Awad confirmed the importance of starting the sewage project, starting with the conveyor line and the treatment unit.

He appreciated the efforts of UNPOS and its cooperation with the local authority in rehabilitating the infrastructure that was destroyed by the aggression over the past eight years, pointing to the importance of adding a crane to the lighting project for the city of Saada.

The Governor of Saada expressed hope that. UNPOS would fulfill previous promises, finance and speed up the completion of new projects.

In turn, the Secretary-General of SCMCHA explained that the visit of UNPOS to Saada governorate came at the invitation of the Humanitarian Affairs Council to implement development and service projects aimed at alleviating the suffering of citizens as a result of the humanitarian crisis caused by the aggression and siege.

He pointed out that projects will be implemented in several sectors, most notably the sewage, lighting and electricity project and the restoration of the Republican Hospital.

He stressed the importance of identifing sewage sites to start work.
“We are continuing to cooperate with the local authority through SCMCHA in providing services in various sectors.” he said

He appreciated the cooperation of SCMCHA and the facilitation of the work and projects of UNPOS.

The meeting reviewed the report of the Director General of the Local Corporation for Water and Sanitation Branch, Muhammad Al-Saadi, on the status of the sewage project, the studies that were submitted for its implementation, the importance of the project to the governorate center, and the needs and difficulties facing the project.

The meeting was attended by a number of officials of SCMCHA, engineers of the United Nations office and directors of executive offices.

Al-Hamli briefed on the needs of Bani Awir Saada isolation from service projects.

Al-Hamli and Awad were briefed on the damages of the floods and the needs of the Al-Hashwa district in Saada.