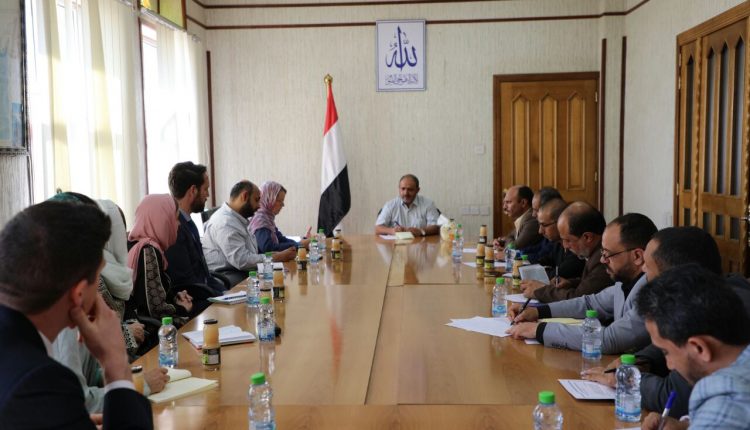 The Secretary-General of the Supreme Council for the Management and Coordination of Humanitarian Affairs and International Cooperation, Ibrahim Al-Hamli, discussed with EU delegation areas of cooperation on the humanitarian side.

The Secretary General of SCMCHA, in the presence of the head of the Planning department Faisal Modhish,and head of International Cooperation department, Ali Al-Kahlani, appreciated the efforts of the European Union in the field of humanitarian work in Yemen.

He confirmed that donors have to ensure that aid reaches those who deserve it by following up on organizations and evaluating their work in a way that ensures Quality performance and alleviating the suffering of citizens.

“The Yemeni people had looked forward from the organizations to pressure in order to stop the aggression and lift the siege, but Yemenis’ wishes have declined as a result of the inability of the humanitarian and human rights organizations, So and they were just being asked to pressure for the introduction of oil derivatives to alleviate the suffering of the citizens” he said.

The Secretary-General of SCMCHA pointed to the importance of working to alleviate the aggravating human suffering, stressing the importance of coordination with SCMCHA in a way that contributes to facilitating humanitarian work, achieving its objectives and directing it towards those who deserve it.

He demanded that the European Union have to have a strong voice and position to convey the grievances of the Yemeni people, and to put pressure on lifting the siege on the port of Hodeidah and opening the Sanaa airport.

He referred to the suffering of the people due to the lack of oil derivatives, which was negatively reflected in the deterioration of the health sector and the water sector, which created an extremely tragic situation.

Al-Hamli affirmed that SCMCHA works flexibly with the organizations, as it was established to overcome the difficulties in front of them and facilitate their tasks and work, in accordance with the principles and values ​​of humanitarian work and respect for the procedures and laws in force in Yemen.

He confirmed the importance of reducing the exorbitant operational expenses by organizations ,where some of which amount to 70% of the total project cost, while the remaining 30 percent are spent on beneficiaries.
Al Hamli called on the European Union mission to reopen its office in Sana’a.

For their part, the representatives of EU delegation expressed their thanks to SCMCHA for its role in providing facilities and overcoming difficulties for humanitarian organizations working in Yemen, stressing their keenness to provide humanitarian services in a way that contributes to alleviating the existing human suffering.

The meeting was attended by Carolina Hedstrom from the European Union Office, Marcela Maciarek, Director of Cooperation at the German Embassy, ​​Deputy Dutch Ambassador Mareke Werda, Senior Project Manager at the Irish Embassy Alan Ralph, and Adam Bergman, Regional Director of Projects at the Swedish Embassy, ​​and from the French Embassy. Melissa Rahmouni, director of international organizations of SCMCHA Turki Jamil, the director of
Evaluation and Monitoring, Muhammad Al-Razza’.

SCMCHA calls for lifting the siege and stopping the humanitarian crisis.