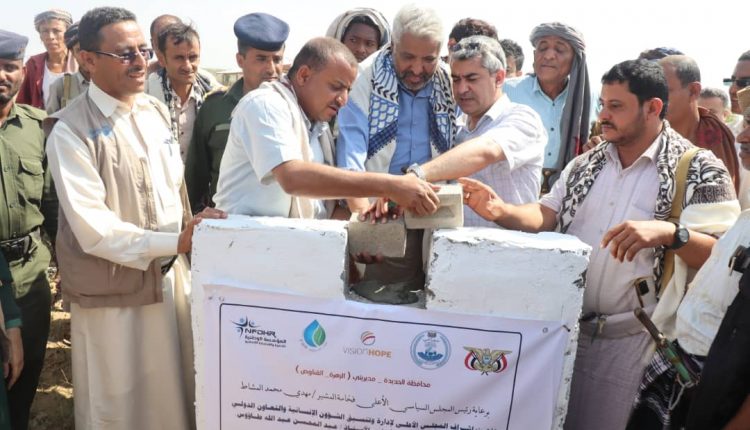 The Secretary-General of the Supreme Council for the Management and Coordination of Humanitarian Affairs and International Cooperation, Abdul Mohsen Tawoos, inaugurated today and laid the foundation stones for 25 service and development projects in Al-Zahra and Al-Qanas districts of Al-Hodeidah Governorate, at a total cost of 414 million riyals.

15 projects were opened, including water tanks with solar energy systems, with an estimated capacity of 30,000 liters per tank in 15 areas in the districts of Al-Zahra and Al-Qanas, and laying the foundation stones for 10 projects within the activities of the Food Security and Agriculture Project, funded by the Federal Ministry for Economic Cooperation and Development, and supervised by International Vision of Hope organization , and the implementation of the National Foundation for Development and Humanitarian Response.

During the opening and laying of the foundation stones for these projects, in the presence of Hodeidah Governor Muhammad Ayyash Qahim and Deputy Minister of Agriculture Radwan Al-Rubai, Tawoos indicated the SCMCHA keenness to implement service and sustainable projects to improve livelihoods and alleviate human suffering, as a result of the continued aggression and siege.

Tawoos pointed out that more than 2,480 families benefited from the Food and Agricultural Security Project.

In turn, the governor of Hodeidah indicated the interest of the revolutionary leadership, the Supreme Political Council and the government in meeting the governorate’s needs for service and development projects.

Qahim appreciated the support of SCMCHA and the organizations that support the implementation of these projects under the current circumstances.

The inauguration was attended by the assistant undersecretary of the governorate, Ghaleb Hamza, the commander of the northern axis, Major General Fadel Al-Dhyani, the director of SCMCHA branch in Hodeidah, Jaber Al-Razehi, the executive director of the National Foundation, Muhammad Abdullah, the directors of the two districts of Al-Zahra, Abdul Rahman Al-Rifai, and Al-Qannas, Muhammad Gillan, and a representative of the Office of Rural water in the governorate, Muhammad Nour, the director of public relations in the National Institution, Jalal Al-Darbi, and a number of members of local authorities and executive offices in the two districts .

The Secretary-General of SCMCHA had inaugurated six development projects in the liberated areas of Hodeidah in mid-November, at a total cost of 521 million and 193 thousand riyals, benefiting more than 70,000 citizens.

Tawoos meets the Deputy Regional Director of OCHA in Hodeidah

The Secretary-General of the SCMCHA meets the Regional Director of UNOPS.