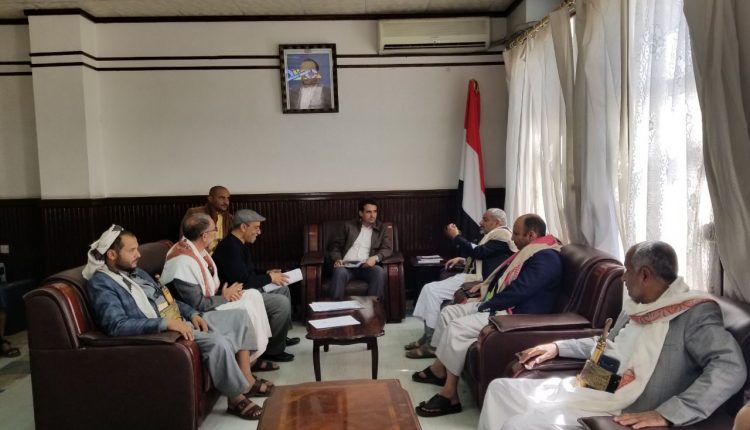 Discussion of the needs of Al-Mahweit governorate for development projects.

A meeting held today in Sana’a discussed the needs of al-Mahweit province for projects in the fields of roads, agriculture and water.

The meeting, which included The Governor of Al-Mahweit Faisal bin Haidar, head of the Department of International Cooperation of the Supreme Council for The Management and Coordination of Humanitarian Affairs, Mana’a al-Asal, head of the Coordination Department Faisal Medheesh and head of the planning department, Mutahar Zeid, addressed the needs of development aspect in the governorate.

The governor confirmed that the province is in dire need of development projects, which contributes to the provision of services and alleviate the suffering of citizens.

For his part, Al-Asal said the Supreme Council is making great efforts to double support in development aspects and livelihood improvement projects.

The meeting was attended by The Deputy Governor Abdul Hamid Abu Shams, Assistant Head of The Cooperation Department Ali Al-Kahlani, General Manager of Branches AbdulRahman Al-Argali and Director of the Council’s Branch in Mahwet Mutahar Sharafuddin.

Tawoos meets the leadership of Youth and Sports Ministry .