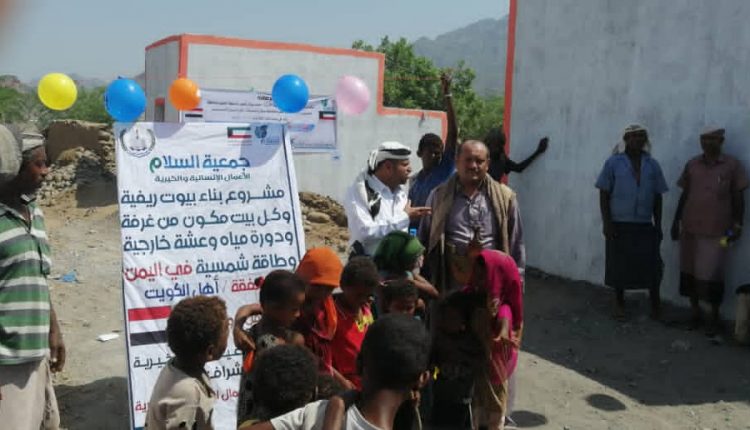 The director of the General Secretariat branch of the Supreme Council for The Management and Coordination of Humanitarian Affairs in Hodeidah Province, Jaber Al-Razhi, opened yesterday the project of 63 housing units for those affected by rain floods in Al Jarahi district provided by the Kuwaiti people under the supervision of the Peace Society for Humanitarian and Charitable Works as well as the implementation of the Al-Nour Society in coordination with the Branch of the General Secretariat of the Supreme Council.

Each residential unit has a room, a toilet and an outdoor nest equipped with integrated solar energy.

In the opening, Al-Razhi stressed the need to provide all the necessary needs for the displaced and those affected by the floods in coordination with the relevant authorities and international organizations, whose duty is to respond quickly to provide emergency humanitarian assistance in such cases.

He praised the initiative of establishing such housing units for citizens in areas affected by the floods. He reiterated his call for humanitarian partners to provide household items and food assistance to affected families and to play an active role in alleviating their difficult situations.

While the representative of al-Nour Charitable Society – project manager Mahmoud Al-Siddiq praised the efforts of the leadership of the province and the branch of the Supreme Council for the Relief of families who were affected by the floods and lost their homes. He pointed to the extent of damage to homes, property and agricultural land caused by the floods. He also praised the facilities provided by the Branch of the General Secretariat of the Supreme Council of the Province to implement the project and benefit the citizens from it.

For their part, the beneficiaries expressed their appreciation for the efforts made by the members of the Branch of the Supreme Council, the Kuwaiti people and the charitable associations peace and al Nour for their speed of humanitarian response as well as the provision of this assistance, which will contribute to alleviating their suffering.

The opening was attended by a number of officials of the local authority and related authorities of the district.