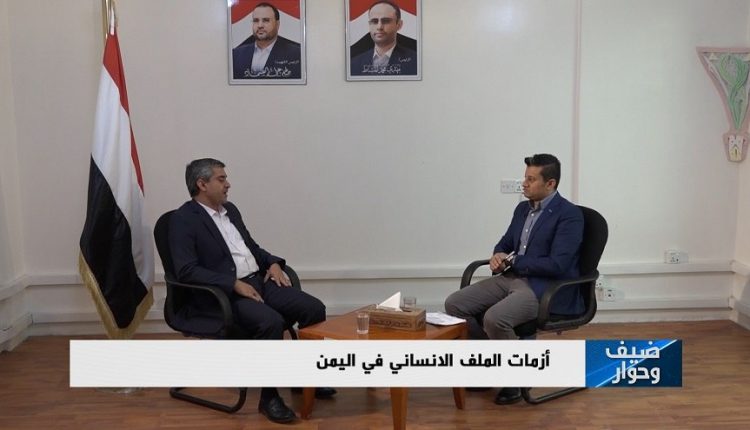 Abdul Mohsen Tawoos, Secretary General of the Supreme Council for the Management and Coordination of Humanitarian Affairs and International Cooperation, criticized the overall corruption situation of international organizations working in Yemen, saying they spend very large amounts on projects ,but what  Yemeni people have is  just about 20%.

In an exclusive interview with al-Alam news channel, Tawoos pointed out that the latest report by the United Nations Panel of Experts, although it contains some sort of description of war crimes, does not amount to what is actually happening on the ground.

He added that previous UN reports have removed from the countries that committed crimes, particularly crimes against children.

He stressed  that the coalition of aggression since six years ago committed the most heinous crimes against the Yemeni people, he said: We believe that the reports and roles of the United Nations are very weak, not at the required level that it honors as the United Nations in presenting the image to the world, pointing out that the coalition of aggression prevented thousands of the sick and wounded to travel outside country.

He explained that the aggression and the lack of funding sources in Yemen led to a disaster, where more than 22 million Yemenis are below the poverty line, adding that health services have completely collapsed, as the basics of health facilities were very poor previously and the aggression came and ended what existed.

“Today, the Yemeni people are going through a very large humanitarian disaster that the coalition of aggression is carrying out, because it is the one who targeted the Yemeni people, infrastructure and livelihoods, as well as directed the organizations to stop aid, while it is in a humanitarian situation,” Tawoos said

Tawoos added that while fuel vessels have been held at sea for 120 days, oil derivatives have been banned from entering Yemen, and that there has been fuel provided by some organizations such as World Health and UNICEF that have also been banned from providing it.

“UNICEF has officially informed us that it will stop refueling health facilities from the sixth month, and we have an official message that donors have forced them to stop this support, as they have used a humanitarian paper as a political card to lobby,” he said.

“We have been working and we have frequent contacts, meetings and messages that humanitarian work should remain neutral from political action, but it is not up to them and they are dependent on the policy of the donor, and the donor is the same aggressor of the United States, Saudi Arabia, the United Arab Emirates and the United Kingdom.”

On the other hand, he pointed out that Sana’a airport has been closed for six years to the Yemeni people and is open to organizations only, while no Yemeni has benefited from it since the beginning of the aggression, and reconfirming : We demand to make the patients, the injured and the chronically ill, who are more than 32,000 cases go broad where their names and statements are with the envoy, the commission in charge of world health and the United Nations.

in regards to the poorest who their situation reached the poverty line, Tawoos confirmed that they are all the Yemeni people and even government officials, adding that all the Yemeni people are vulnerable to famine and poverty, and said: If there were no actions and self-efforts by the authorities and community initiatives, the situation would have been even worse, and the aim of prolonging the aggression is to bring people to this level.
According to the UN itself, 24 million Yemenis need assistance, he said, adding that these reports come from surveys we share with them, and the number is set, and we hope that the UN will seek at least assistance for this figure.

On the other side of the meeting, the Secretary-General of the Supreme Council for the Management and Coordination of Humanitarian Affairs pointed out that: “The crisis of displaced persons is one of the most severe crises that we suffer as a humanitarian council and we seek to solve that . The variables come weekly or monthly, and overnight the districts turns into a disaster and its people become displaced, for example, half of the people of Sa’da governorate have been displaced.

“Organizations are always focused on emergency assistance, which is wrong, and at the same time spend very large amounts on projects that only reach the Yemeni people about 20 %” Tawoos said.

“We have refused to allow some projects to be implemented for such organizations, because they are submitting projects for the yemeni people, for example, for $5 million, when we know that it only costs $800,000 or $1 million,” He said.

He added that some organizations have tried to solve this, we have reached some projects that may be funded in half or 60 percent direct Yemeni activities.

” there is considerable corruption among the organizations, for example, the operating expenses of ChildSave is 80% of its funding, and it recognizes this, as well as UN-organizations such as UNICEF and WHO unimaginable corruption in their projects” Tawoos confirmed

He added: In 2019, the funding of these organizations was more than $4 billion and 600 million dollars, and so far from 2020 about $2 billion, we won’t accept of spending these funds in the name of Yemeni people .

Tawoos: The sums granted to water projects were sufficient to deliver water to every home.

The opening of a giant development project in Dhamar: providing water to half of the…

1,200 families in need of aid in Majzer of Marib province.

Al Masirha Channel,Tawoos : our condition not outside state’s sovereignty, and…