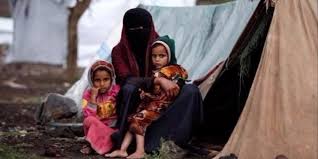 1,200 families in need of aid in Majzer of Marib province.

Majizer district of Marib province, which has a population of more than 12,000 people, that is located between Marib and Al-Jouf provinces, is witnessing a major humanitarian tragedy due to the repercussions of the aggression and siege, which has had a negative impact on the lives of citizens, where poverty, destitution and famine are destroying the local citizen.

In a field survey of the SCMCHA branch team, hundreds of cases of acute, medium and severe nutrition have been recorded, which is a warning bell for all organizations and authorities concerned to stop humanitarian disaster that may cause neglect on the faces of children in a slaughterhouse.

As the cessation of health facilities from providing simple and primary medical services to patients, puts the people between the fire of death slowly or travel to far areas to receive treatment with the resulting high costs. The people today are in urgent need to activate the health facilities in the districts and villages and provide them with equipment Medicines and medical supplies to be able to play their role in serving citizens and alleviating their suffering.

Residents were forced to drink contaminated and unsanitary water after the main water project of the district was suspended after the targeting of reservoirs by a series of air raids, which led to the emergence of many diseases and the incidence of acute water diarrhea, where it is required to provide a station to purify drinking water and distribute water on various remote villages.

More than 1,200 families are in need of emergency food assistance to alleviate their suffering, as many families returned to their homes after the liberation of the district and the control of the army and popular committees, which calls for urgent action to normalize the general conditions and facilitate the return of the remaining displaced families to their areas and provide livelihoods For them to be able to live in peace and under sources of income that guarantee them and their children the right to food, medicine and housing, which are the basic rights guaranteed to them by the Universal Declaration of Human Rights.

Perhaps the most common thing facing the people in the Mejzer district is the absence of sources of income and the scarcity of agriculture, which calls for serious action to support farmers and encourage them to replant their land for the benefit of a decent life.

There are also dozens of families whose homes have been destroyed by aerial bombardment, and are in dire need of shelter and adequate shelter and mattresses for them and their families so that they can live temporarily until their destroyed homes are rebuilt or help them build new homes that guarantee them the right to housing.

The complete power outage of the Mejzer district calls into account that electricity is no longer a luxury, but has become a basic condition for living safely, which requires the provision of solar panels for families in need to see the light of day for them and their children.

Supporting the educational process and ensuring its continuation requires the support of schools and educational staff so that they can educate thousands of children who have been deprived of education due to the war in the district, and to establish a simultaneous program for the return of children to school.

Suffering of the people there are alot ,but the above mentioned was the most prominent issues that concern the people and require urgent action to solve them and alleviate their suffering, which is the responsibility of all official bodies and humanitarian and international organizations where the region is most deserving and suffering appeals to them to move to save it.

A workshop in Sana’a in the field of agricultural exension.

Discussion of coordination between the Supreme Council and the Echo Office

The opening of a giant development project in Dhamar: providing water to half of the…

Al Masirha Channel,Tawoos : our condition not outside state’s sovereignty, and…