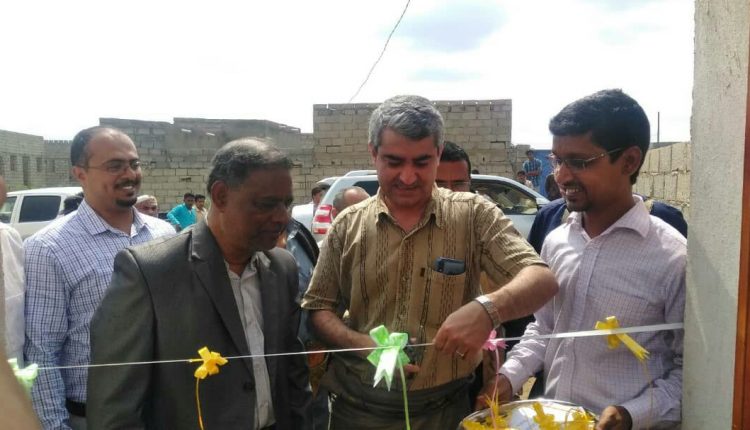 The Secretary General of the Supreme Council for The Management and Coordination of Humanitarian Affairs and International Cooperation (SCMCHA), AbdulMohseTawoos, opened today at the Zahra district in Hodeidah governorate the branch of the Grameen Yamen National Foundation.

At the opening, which was attended by the director of the two branches of the General Secretariat of the Supreme Council in Haijah Allan Ali Daath, in Hodeidah Jaber al-Razhi, director of the Zahra District in Hodeidah Abdul Rahman Al-Rifai and a number of officials of the local authority and executive offices of the directorate, Tawoos praised the humanitarian activities of local civil institutions especially the implementation of small projects that help the poor family to rely on themselves.

He pointed out that cannot be relied upon donors originations to achieve any living stability. He also pointed to the state’s directions is to stimulate the energies of society to be able to rely on itself and the national vision of development projects in this aspect.

Tawoos noted the success of The Grameen Yamen Foundation in the service of poor families. He called on businessmen to finance economic empowerment activities for the poor.

Officials of the Grameen Foundation said the foundation aims to promote the economic empowerment of the poor by financing their small income-generating projects by giving them small loans that allow them to establish their own projects.

In addition, the speech of local authority officials and leaders in Zahra directorate pointed out the importance of programs and activities that poor families mainly get benefit of .

Project to light some of the main Streets with solar energy launches in the Secretariat of the capital.