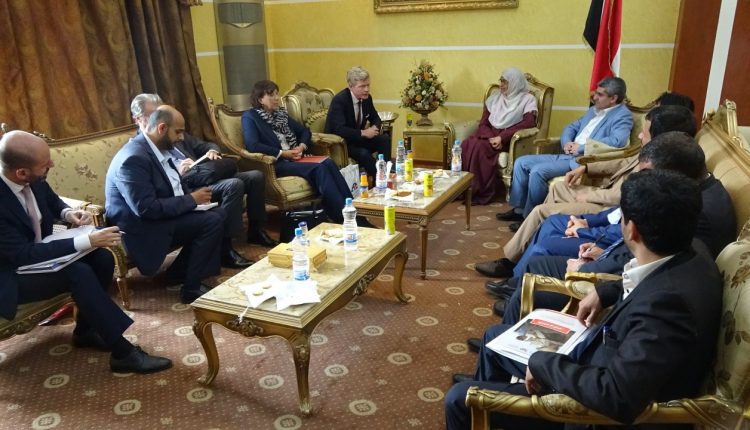 The Secretary-General of the Supreme Council meets with the ambassadors of the European Union, the Netherlands and France.

The Secretary-General of the Supreme Council for the Management and Coordination of Humanitarian Affairs, and International Cooperation(SCMCHA) AbdelMohsen Tawoos, met today with the European Union’s Ambassador to Yemen, Hans Grundberg, and the Ambassadors of France, Christian Testo, the Netherlands and Irma van Doren.

The meeting, which was attended by Minister of Human Rights Radaya Rauh, discussed ways to alleviate the humanitarian crisis due to the continuing aggression and blockade, which caused the worst humanitarian crisis in the world, according to UN reports.

In the meeting, the Secretary General of the Council confirmed the council’s keenness to strengthen coordination with the European Union and the countries concerned in alleviating the humanitarian crisis that the country is experiencing as a result of the aggression and the blockade, pointing out that the organizations provide the Yemeni people only 20% out of the total aid.

He explained that millions of Yemenis need humanitarian assistance at various levels and in the many areas known in international humanitarian work. He pointed out the importance of strengthening the interaction and coordination between the government represented by the Supreme Council and the European Union in order to pass all Obstacles as well as overcome the difficult humanitarian situation in Yemen.

Minister of Human Rights ,Radaya Rawah, reviewed the humanitarian situation in Yemen and the difficulties that faces, in order to move forward in the field of humanitarian work supporting the Yemeni people.

Discussion of the interventions of the Danish Council in Hodeidah Province.

Tawoos chaired meeting to discuss the epidemic situation in Hodeidah.