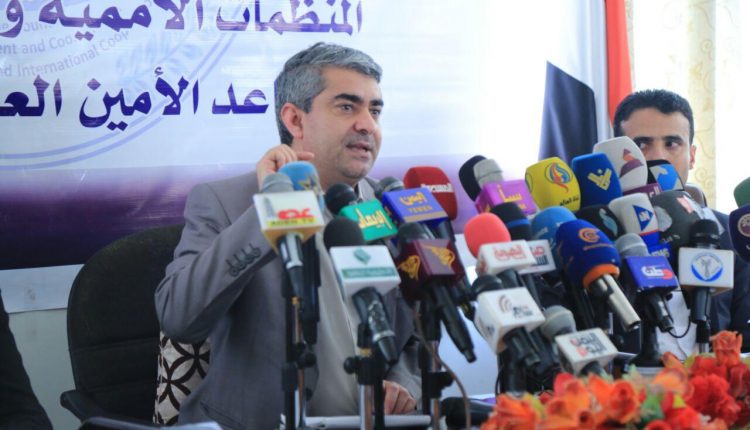 “Where does the humanitarian aid money go.?”Al Tawoos reveals the tampering and corruption of international organizations

The Secretary General of the Supreme Council for the Management and Coordination of Humanitarian Affairs and International Cooperation ,AbdulMohsen Tawoos ,on Monday revealed the absurdity and waste of international organizations with donor funds allocated to the Yemeni people, denying the figures provided by the organizations in their reports on the amount of spending on humanitarian work in Yemen.

At the press conference, which was held today in Sana’a by the Council under the title of “waste and deliberate tampering of the humanitarian aid funds allocated to the Yemeni people, Tawoos explained that the Supreme Council for Humanitarian Affairs (formerly the National Authority) made clear that the allegations of UN assistance in the Security Council were caused by the control of the humanitarian work done by the Council to meet the needs of the Yemeni people.

The International Organization for Migration (IOM) has plundered the funds allocated for transporting refugees to their countries, and has not transferred them.

Al Tawoos pointed  out the suspicious role played by some organizations, which was to establish secret courses targeting the Yemeni people in morality and some of those courses were seized in the field of Al Sabeen In Sana’a.

abdulMuhsin said the “Together  to become Stronger” project for USAID exceeded $9 million, and the citizen benefited only about $2 million, explaining that the organization looted more than $1.4 million from the “Child Protection” project.

Al Tawoos  some projects that  presented to the Supreme Council equal 11% of the grant rate, and the rest of this grant is not available. He also pointed that organizations were addressed to be more effective in order to become activities that benefit society and reduce useless activities, and that exaggeration of operational expenses hinders the value of projects, but there is complete disregard.

. He clarified that UN organizations do not abide by the main agreement with the Republic of Yemen and carry out illegal acts inside the cities, indicating that there are organizations that paid money to figures in some cities to cooperate with them in facilitating their intelligence work.

He revealed that two persons of Jordanian nationality who belong  to the United Nations were smuggled from Aden to the northern regions to carry out intelligence work.

Secretary-General of the Supreme Council called on donors of UN to investigate the funding places in Yemen.

The Secretary-General of the Supreme Council meets with the Director of the Adra Development and Relief Organization.