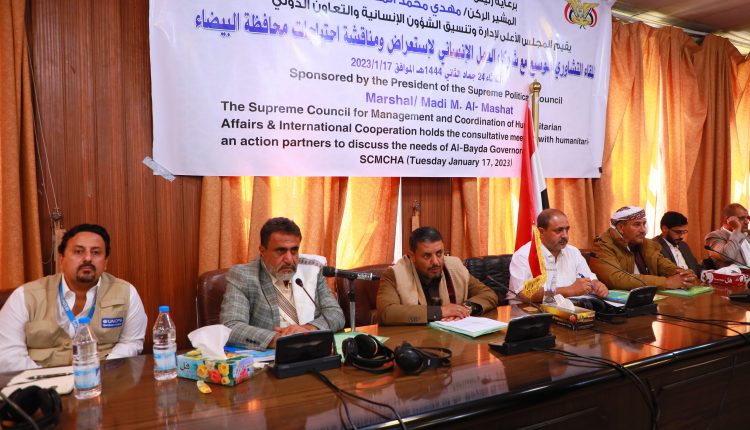 A consultative meeting with humanitarian action partners to discuss the needs of Al-Bayda Governorate.

The Supreme Council for the Management and Coordination of Humanitarian Affairs and International Cooperation organized today an expanded consultative meeting with humanitarian partners to review and discuss the needs of Al-Bayda Governorate.

The meeting, in the presence of the Secretary-General of SCMCHA, Ibrahim Al-Hamali, the Governor of Al-Bayda Abdullah Idris, the Deputy Minister of Local Administration Qassim Al-Hamran, and representatives of international and local organizations, discussed the priorities of the actual need plan for Al-Bayda Governorate, according to what was submitted by the local authority in the governorate.

In the meeting, the Secretary-General of SMCHA explained that the meeting aims to shed light on the needs of the governorate in basic sectors, where the basic services in the governorate was weak as result of the aggression and siege.

“Al-Bayda province is one of the most prominent provinces receiving displaced people, whether from inside or outside the province, in addition to African migrants who are present in it,” he said.

Al-Hamali called on humanitarian partners to assume their responsibilities and move urgently and seriously to adopt the needs , focus on infrastructure and sustainable projects.

He confirmed SCMCHA’s readiness to facilitate the work of partners in the field to implement projects and interventions that contribute to alleviating the human suffering experienced by citizens in the governorate and Yemen in general as a result of the aggression and blockade.

The Secretary-General indicated to SCMCHA’s keenness to exert efforts in cooperation with humanitarian partners to alleviate the suffering of citizens and displaced people in the governorate and other governorates.

He hoped that the year 2023 would be a humanitarian year par excellence, starting from Al-Bayda Governorate.

For his part, the governor of Al-Bayda explained that the governorate differs from the rest of the provinces in its nature and the conditions it has lived for many years.

He touched on the events, conflicts and wars that the governorate was witnessed,which made many of its people to the brink of poverty and hunger.
He pointed out that the people of the province lack the most basic services such as water, electricity, health and education, in addition to the need of the vast majority of them for food and medicine as a top priority.

“The province’s needs are great in the humanitarian and other fields, which requires the support of humanitarian partners to raise the level of their intervention to meet the emergency needs of citizens,” he added.

The governor also affirmed the readiness of the governorate’s leadership and the concerned authorities to provide the necessary facilities to implement any activities within the framework of the priority and in accordance with the need plan.
He appreciated the support of SCMCHA for the efforts of the leadership of the local authority in the governorate, hoping that the people of the province will feel the support of humanitarian partners and their interventions to alleviate the suffering caused by the continued aggression and siege.

The meeting included extensive discussions, during which representatives of organizations and humanitarian partners pointed to the importance of strengthening communication channels and presenting different points of view, and reviewed the priorities of the needs of the people of Al-Bayda Governorate.

#A consultative meeting with humanitarian action partners to discuss the needs of Al-Bayda Governorate.
Share FacebookTwitterGoogle+ReddItWhatsAppPinterestEmail

Al-Hamli reviews the needs of the Central Correctional Facility in the capital Sana’a.

Al-Hamali and Al-Durra inspect the progress of work at Sana’a International Airport.

SCMCHA condemns the burning of a copy of the Holy Quran in Sweden.

Al-Hamli meets the new head of ICRC mission in Yemen.

SCMCHA is launching the implementation of the Code of Conduct.