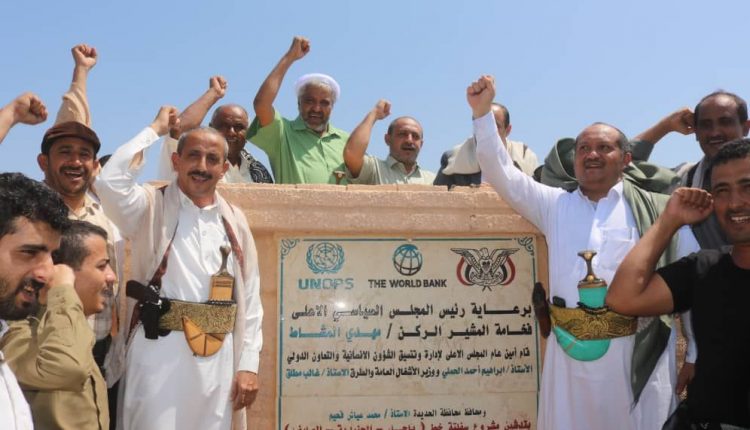 Inauguration of the Bajil-Junidah-Saleef line asphalting project in Hodeidah, at a cost of $ 4 million and $488,000

The Secretary-General of the Supreme Council for the Management and Coordination of Humanitarian Affairs and International Cooperation Ibrahim Al-Hamli, the Minister of Public Works and Roads, Eng. Ghaleb Mutlaq, and the Governor of Al-Hodeidah, Muhammad Ayyash Qahim, launched today the asphalting project of the Bajil – Al Junaidiyah – Al Saleef line, with a length of 33.3 km.

During the inauguration, the Secretary-General of the Supreme Council, Ibrahim Al-Hamli, confirmed that the asphalting project of the Salif-Junaidiya-Bajil line comes within the framework of SCMCHA’s interest in directing funds towards implementing sustainable development and service projects that meet the needs of citizens and contribute to alleviating the human suffering experienced by the people as a result of the aggression and the siege .

He pointed to SCMCHA’s keenness to provide all the needs of the people of Hodeidah Governorate from service and development projects that touch the daily lives of citizens, including roads.

For his part, the Minister of Public Works and Roads indicated that the project comes as a translation of the revolutionary and political leadership’s interest in the people of Hodeidah Governorate by providing their needs for sustainable service and development projects.

He explained that the line is considered one of the strategic and vital roads that will serve dozens of villages and farmers overlooking it.
He indicated to the efforts of the leadership of SCMCHA and the local authority in Hodeidah Governorate, in following up on the implementation of this project, and other service and development projects implemented in the governorate during the last period.

Governor Qahim and Deputy Governor Muhammad Helisi confirmed the importance of this vital road, which will serve thousands of residents and farmers in the northern and eastern districts.

They appreciated the interest of the Leader of the Revolution and the Chairman of the Supreme Political Council in providing the needs of Al Hodeidah people in terms of service and development projects that contribute to alleviating their suffering imposed by the aggression and siege.

The inauguration was attended by the Undersecretary of the Ministry of Works for the Roads Sector, Eng. Khaled Bashmakh, and the Director of SCMCHA Branch in the governorate, Jaber Al-Razhi, and the director of Monitoring and Evaluation. Depatment of SCMCHA, Muhammad Al-Razza’, and the Roads Development at the Ministry of Works, Yahya Al-Bashari, and the Works Office in the governorate, Engineer Muhammad Muthanna.

Al-Hamli and JoyceMsuya briefed on the needs of Al-Thawra Hospital in Al-Hodeidah.

Amid suffering that is exacerbated by the reduction of aid,The number of IDP has…

Al-Hamli: Disbursing incentives to 34,367 teachers and employees in three…

Al-Hamli inaugurates project to rehabilitation project of the main street in Taiz,…