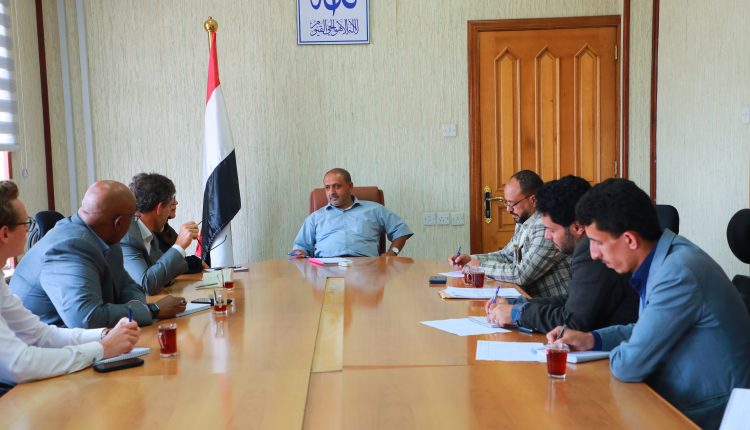 Al-Hamli discusses with the Deputy Coordinator of the UN the humanitarian situation in Yemen.

The Secretary-General of the Supreme Council for the Management and Coordination of Humanitarian Affairs and International Cooperation, Ibrahim Al-Hamli, discussed with the Deputy Resident Coordinator of the United Nations for Humanitarian Affairs in Sana’a Diego Zorrilla, the humanitarian situation in Yemen in light of the continued aggression and siege.

The meeting,in the presence of the Head of the Planning Department of SCMCHA, Faisal Modhish, and the Deputy Director of the OCHA Office in Yemen, Saeed Hersi, touched on aspects related to the reduction of humanitarian aid, which aggravated the suffering of citizens.

The Secretary-General of SCMCHA pointed to the importance of UN and international organizations role in alleviating the suffering of the Yemeni people as a result of the humanitarian crisis caused by the aggression and siege.

He confirmed that the United Nations and its bodies have to assume their role and responsibilities towards the humanitarian crisis, which was accompanied by heavy rains that caused great damage to infrastructure, farms, camps for displaced people and homes, through the implementation of service, development and relief projects that contribute to alleviating the suffering of those affected.

Al-Hamli called on the United Nations to work on increasing and expanding humanitarian aid and distributing it on a monthly basis.
He pointing to WFP’s announcement to reduce humanitarian aid, which is actually reduced and does not meet the level of need.

He called on international organizations to support the National Center for Mine Action, pointing to the increase in the number of civilian victims who fell as a result of mines.

Al-Hamli pointed out that SCMCHA is carrying out its full duties and responsibilities by facilitating the work of organizations in Yemen, stressing that the organizations have not been exposed to any security incidents or threats in the areas of the Salvation Government, unlike the areas under the control of the aggression and its mercenaries.

He also confirmed the importance of working on implementing sustainable service projects and finding emergency solutions and treatments to confront disasters and damage and protect citizens from the flow of torrents.

In turn, , the Deputy Resident Coordinator of the United Nations expressed his understanding of the humanitarian situation in Yemen, stressing that he will convey what has been proposed to find solutions and remedies to alleviate human suffering in Yemen.

A meeting to discuss the needs of the sectors of the Ministry of Transport.

Al-Hamli meets the delegation of the Swiss Agency for Development.

Al-Hamli meets the delegation of the EU mission to Yemen.