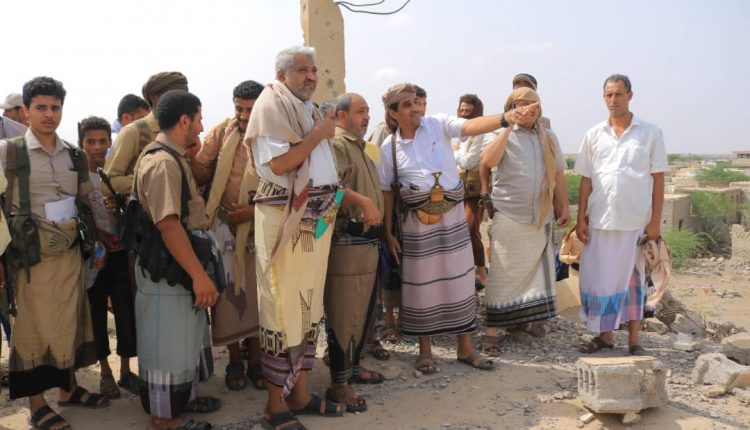 The Secretary-General of the Supreme Council for the Management and Coordination of Humanitarian Affairs, Ibrahim Al-Hamli, and the Governor of Al-Hodeidah, Muhammad Ayesh Qahim, were briefed today on the needs of Al-Durayhimi district, in terms of service and development projects.

During the visit, Al-Hamali and Qahim, along with the first representative of the governorate, Ahmed Al-Bishri, were briefed on the needs of the people of Al-Durayhimi city for service and development projects that require urgent provision, returning the people of the district to their homes, and return life.

They heard from the director of the district and directors of the offices of finance, works, zakat, rural water, the Executive Center for Mine Action and SCMCHA branch , an explanation of the extent of the destruction and damage to homes, government buildings, service facilities, roads and all service sectors since the first day of the aggression and the US-Saudi-Emirati blockade.

The Secretary-General of SCMCHA explained that the descent to the Al-Durayhimi district comes in implementation of the directives of the Leader of the Revolution and the Chairman of the Supreme Political Council to review the situation and identify the necessary needs.

Al-Hamli confirmed the importance of completing the opening of roads and clearing the sites of mines, bombs and remnants of the aggression.

He indicated that SCMCHA is working with the local authority in the governorate, the relevant authorities, and international and local organizations, to restore and rehabilitate what the aggression destroyed from the homes of citizens, schools, health facilities, water networks and roads to rebuild what was destroyed by the aggression and the return of the city’s residents to their homes.

Governor Qahim and Deputy Governor Al-Bishri confirmed that the leadership of the local authority in cooperation with SCMCHA is working to return life in Al-Durayhimi city through the reconstruction of the most important infrastructure destroyed by the US-Emirati-Saudi aggression’s warships and planes and their mercenaries, according to need and according to what is available.

They pointed out that the first road to the city of Durayhimi was opened today from the coastline, after it was cleared of mines by the National Mine Action Program.

Qahim and Al-Bishri also confirmed that the local authority is working to start rehabilitating vital projects as a priority for the reconstruction program of the city of Al-Durayhimi.

They indicated that this requires a double intervention by the concerned authorities, the contribution of businessmen and national institutions to support the emergency intervention programs implemented by the government and the local authority in the governorate.

The visit was accompanied by the head of the Executive Center for Mine Action, Brigadier Ali Safra, the directors of the branches of the Zakat and Rural Projects Authority Ahmad Al-Hadi, the works offices, Eng. Muhammad Muthanna, the Finance Muhammad Al-Washli, SCMCHA branch of in the governorate, Jaber Al-Razhi, the Director General of Local Organizations, Abdul Salam Al-Nawab, and a number of technicians. and specialists in service offices.

Al-Hamli discusses with Save the children’s director the needs of Al-Durayhimi District in Al-Hodeidah.