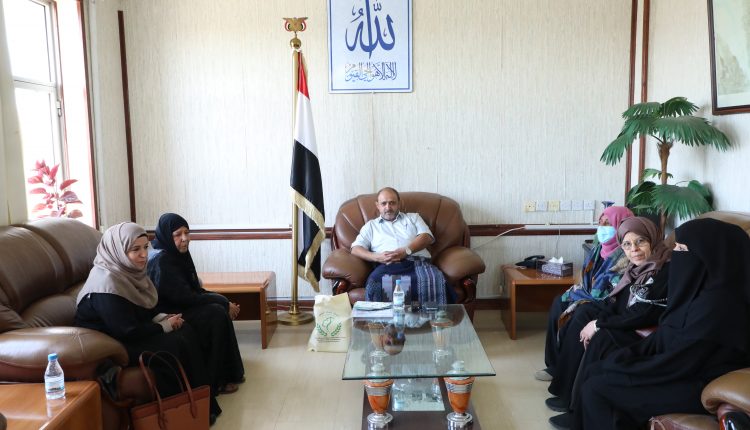 Discussing the situation of Yemeni women in light of the aggression and siege.

The Secretary-General of the Supreme Council for the Management and Coordination of Humanitarian Affairs and International Cooperation, Ibrahim Al-Hamli, discussed today with the head of the Women’s Union, Fathia Muhammad Abdullah, the situation of Yemeni women in light of the aggravated suffering due to the unjust siege and the seven-year-old aggression.

The meeting confirmed the importance of the Yemeni woman’s role in strengthening resilience in the face of aggression and presenting projects aimed at alleviating the acute need according to the necessary priorities.

The Secretary General of SCMCHA, in the presence of a number of union leaders, appreciated the role of Yemeni women in strengthening resilience and facing challenges as well as humanitarian repercussions that exacerbated the situation and made it more difficult as a result of the continued aggression and siege.

Al-Hamli pointed to the position of women in society, as they are mothers and sisters, and they have a great influence on all individuals and depend on them in the advancement of society.

He stressed the importance of choosing activities and projects that serve women and in what contributes to providing services according to the priorities of needs raised by the relevant authorities in all Areas of life.

For her part, the head of the Yemeni Women’s Union affirmed keenness to enhance the role of women in all fields, pointing to the importance of coordination with SCMCHA of Humanitarian Affairs regarding women’s projects, which contributes to alleviating human suffering, of which women are considered the most affected groups.

Discussing the humanitarian activities of the Islamic Relief Organization in Yemen