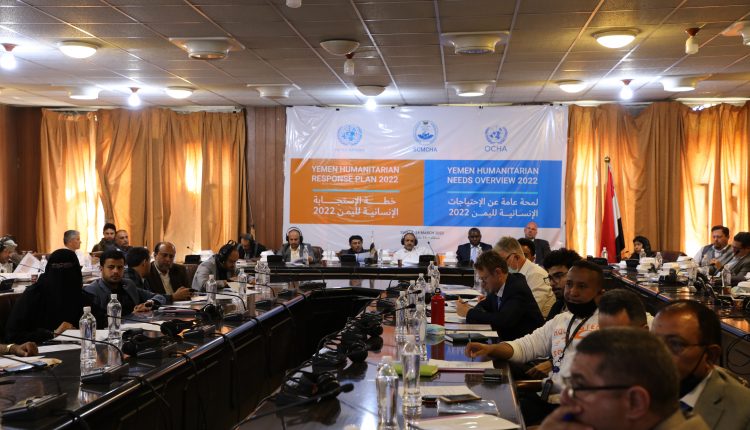 SCMCHA discusses the humanitarian need and response plan for the year 2022 AD.

An expanded meeting of the Council of Humanitarian Affairs and representatives of government agencies and international organizations operating in Yemen was held today in Sana’a by the Secretary-General of SCMCHA, Ibrahim Al-Hamali.

The meeting, in the presence of the heads of departments and representatives of government agencies and international organizations, discussed the priorities of the needs plan for the year 2022 AD, in what determines the actual need, according to what is raised by the relevant authorities, and contribute to the implementation of the response plan according to the comprehensive plan for the priorities of emergency needs.

The figures indicated that more than 23 million people are in urgent need of obtaining the necessary humanitarian aid, according to the indicators of need that have been worked out, and they include food security, health, education, and other necessary and urgent needs.

The Secretary-General of SCMCHA explained during the meeting the extent of the human suffering in Yemen, which was exacerbated by the continuation of the aggression and the existing siege.

He appealed to international organizations to play their role in the humanitarian aspect, and to have a strong position to make pressure to lift the siege, and allow the entry of oil derivatives ships, to alleviate the suffering of Yemenis.

Al-Hamli confirmed SCMCHA keenness to facilitate the work of organizations and work in accordance with the principles of humanitarian work, stressing the importance of hard work and continuous coordination to overcome difficulties, find urgent solutions to meet challenges, provide aid, alleviate the suffering of citizens, and go towards development and sustainable projects.

In a recorded speech, the United Nations Resident Representative and Coordinator for Humanitarian Affairs, William David Grisley, pointed to the extent of Yemenis’ suffering are going through, pointing to the figures that show the increase in the level of urgent need for more than two-thirds of the Yemeni people.

He indicated to the importance of working on providing support and funding to bridge the gap between the size of the need and the level of response.

In the meeting, the acting resident representative of the United Nations Population Fund in Yemen, Nestor Omohangi, stressed the importance for serious and joint work to achieve the objectives of humanitarian work, to alleviate the human suffering suffered by the people of Yemen.

The meeting affirmed the concerted efforts between the concerned authorities and humanitarian organizations operating in Yemen, in accordance with the mechanisms of humanitarian action and the priorities of the need plan, to achieve the common objective of alleviating the existing human suffering.

Discussing the suffering of thalassemia patients as a result of the continuation of the siege.

SCMCHA condemns the execution crimes of prisoners by the Saudi regime.