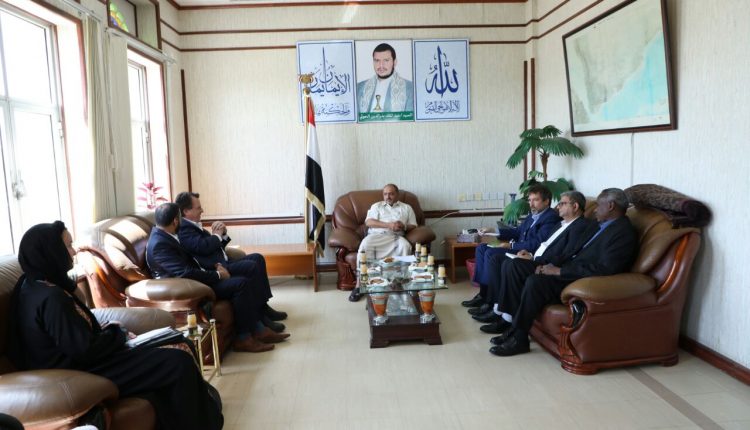 The Secretary-General of the Supreme Council for the Management and Coordination of Humanitarian Affairs and International Cooperation, Ibrahim Al-Hamali, met today with the United Nations Resident Coordinator and Humanitarian Coordinator, William David Grisley.

In the meeting, Al-Hamali confirmed that SCMCHA has provided and will provide all facilities to move forward in implementing the tasks of humanitarian work and the commitments of the United Nations organizations, agencies and programs in the field of humanitarian work to mitigate the repercussions of the human tragedy resulting from the siege and aggression.

He explained that Yemen suffers a lot of difficulties in light of the aggression coalition countries deliberately starving the Yemeni people and adopting a policy of collective punishment by preventing the entry of ships of oil derivatives and domestic gas despite the permits granted by the United Nations.

He pointed out that the reduction of aid announced by WFP would increase the suffering of the Yemeni people and exacerbate the humanitarian and economic situation.

The Secretary-General of SCMCHA pointed to the importance to strengthen the positive roles of UN and international organizations to pressure and work for the release of fuel ships and to neutralize civilians from being bombed by the coalition of aggression.

He indicated the importance of humanitarian action to keep pace with pressure efforts to lift the siege and stop the aggression against the Yemeni people so that they can rise without the need to collect humanitarian funds that do not meet their urgent needs.

He indicated to the keenness of the United Nations to neutralize civilians and make efforts to seek protection for them, and to denounce all crimes that target civilians.

Discussion the coordination mechanisms and priorities for the Ministry of Education.