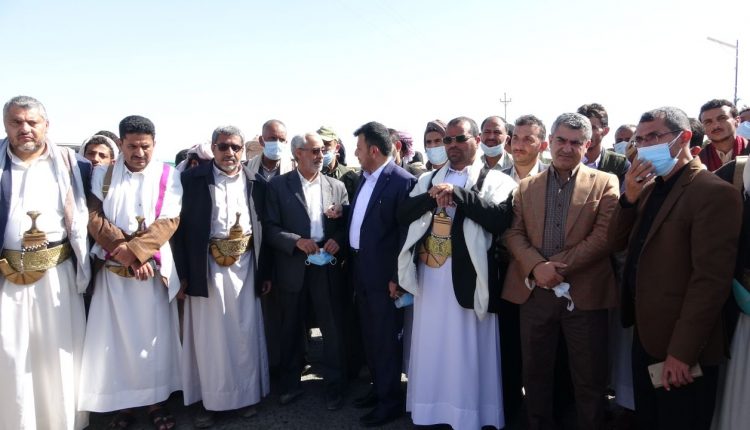 Tawoos and a UN team visit the crime scene of pretrial prison in Sa’da.

The Secretary-General of the Supreme Council for the Management and Coordination of Humanitarian Affairs and International Cooperation, Abdulmohsen Tawoos, and a team of United Nations and international organizations working in Yemen were briefed on the crime scene of the US-Saudi-Emirati aggression coalition in the pretrial prison in Sa’da.

Tawoos and the UN team, in the presence of the Minister of Public Health and Population, Dr. Taha Al-Mutawakel, and the Governor of Sa’da, Muhammad Awad, inspected the extent of the damages in the pre-trial prison and the massacre of the aggression against the prison inmates, which killed 91 martyrs and 236 wounded.

They were also briefed on the conditions of the wounded in the orthopedic, burns and intensive care departments of the Republican Hospital Authority in Sa’da, and heard from the wounded an explanation of the brutality of the aggression in targeting prison wards and their suffering as a result of the raids on the prison and the lack of capabilities and equipment to save them.

The visitors were briefed on the extent of the pressure facing the hospital and its needs for medical and treatment supplies, and the efforts made to overcome them, especially in light of the scarcity of medicines and medical supplies for burns.

In turn, the Secretary-General of SCMCHA indicated that the UN and international organizations were informed of the extent of the massacre committed by the coalition of aggression against the prison inmates.

He called on the organizations operating in Yemen to play their role in meeting the needs of the health sector in Sa’da, especially the Republican Hospital, and providing medicines and medical supplies.

Separately, the Secretary-General of the Supreme Council for the Management and Coordination of Humanitarian Affairs and International Cooperation, Abdel Mohsen Tawoos, indicated that this crime will remain a disgrace to the coalition of aggression.

He called on the United Nations and the Security Council to assume their legal, humanitarian and moral responsibilities, to deal seriously and firmly with these crimes, and to work to stop these crimes.