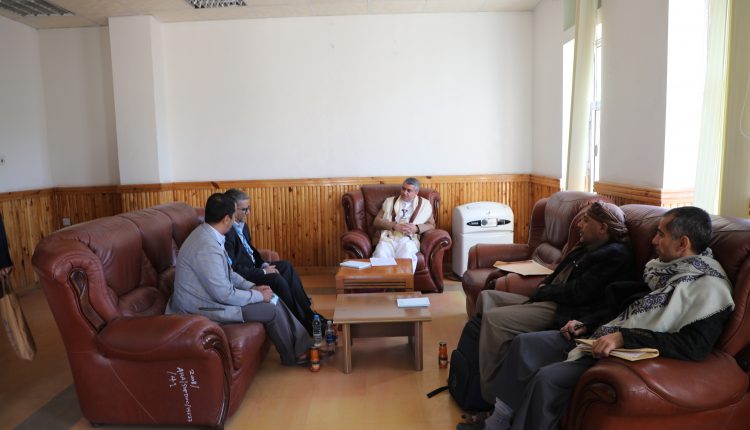 The Secretary-General of the Supreme Council for the Management and Coordination of Humanitarian Affairs and International Cooperation, Abdulmohsen Tawoos, met today with the Director of OCHA, Sajjad Muhammad Sajid.

During the meeting, they discussed the humanitarian situation in Yemen in light of the continuation of the blockade and the detention of oil derivatives ships by the coalition of aggression.

In the meeting, Tawoos pointed out the importance of international and humanitarian organizations role in alleviating the suffering of the Yemeni people in light of the humanitarian crisis as a result of the aggression and siege.

Tawoos indicated to the facilities provided by SCMCHA for humanitarian activities to alleviate the suffering of citizens as a result of the worst humanitarian crisis in the world.

He also called for the completion of the second phase of the multi-sectoral survey project because of its importance in identifying needs, preparing and submitting a response plan on time.

He reviewed the challenges facing the service sectors, especially the health sector, as a result of the detention of fuel ships despite obtaining UN entry permits to the port of Hodeidah.
He considered the detention of ships a violation of international charters and laws.

For his part, the Director of OCHA expressed his understanding of the humanitarian situation in Yemen, stressing that the OCHA office is working to release five fuel ships that have obtained UN permits.

He confirmed that he is working with the relevant organizations to implement a multi-sectoral survey project according to the arrangement and start the second phase.

He appreciated the role of SCMCHA in facilitating the organizations’ work as the coordinator of humanitarian operations with organizations working in Yemen.

The meeting was attended by the Deputy Head of the International Cooperation Department, Ali Al-Kahlani.

Tawoos and a UN team visit the crime scene of pretrial prison in Sa’da.