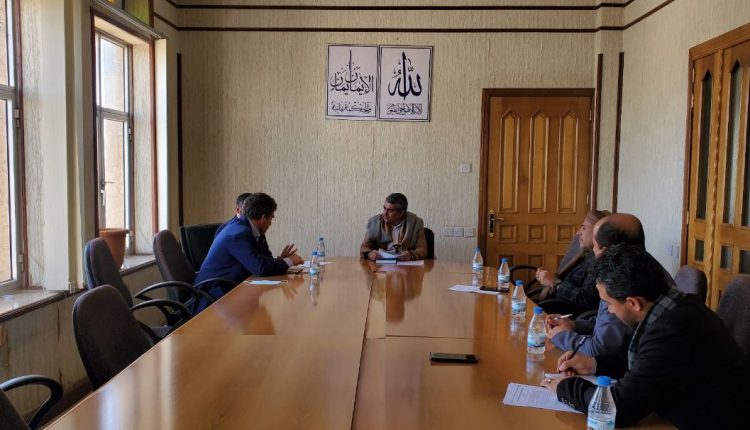 Tawoos discusses with the UN Deputy Coordinator, the humanitarian situation in Yemen.

The Secretary-General of SCMCHA, Abdul Mohsen Tawoos, discussed today with the Deputy Resident Coordinator of the United Nations for Humanitarian Affairs in Sana’a Diego Zorrilla, the humanitarian situation in Yemen in light of the escalation of the countries of the coalition of aggression.

The meeting touched on aspects related to the aggression coalition’s targeting of civilian objects and the infrastructure of the Yemeni people, which exacerbated the suffering of Yemenis.

In the meeting, the Secretary-General of SCMCHA pointed to the importance of the role of international and humanitarian organizations in alleviating the suffering of the Yemeni people as a result of the continued aggression and siege, and the accompanying escalation actions against civilians.

“It is clear to United Nations officials, during their visit to the places that were recently bombed, the type of civilian targets that are being targeted by the countries of the coalition of aggression, as a result of which houses, hospitals, commercial centers, private companies and other civilian objects were damaged, and the targeting of the place of detention of prisoners despite the prior knowledge of their whereabouts by ICRC” Tawoos said.

Tawoos pointed out that it is necessary to neutralize Sanaa International Airport as a humanitarian priority, and the United Nations should press towards achieving this.

He called on the United Nations to work on increasing and expanding humanitarian aid and working on disbursing it on a monthly basis, pointing out that the WFP’s announcement to reduce humanitarian aid, which is actually reduced, does not meet the level of necessary need.

He called on international organizations to work in support of removing the mines planted by the mercenaries of the aggression in Hodeidah governorate, pointing to the increase in the number of civilian casualties who fell as a result of those mines.

in turn, the Deputy Resident Coordinator of the United Nations for Humanitarian Affairs in Sana’a expressed his understanding of the humanitarian situation in Yemen, confirming that work on many points is a subject of discussion and will convey what has been proposed to find solutions and remedies to alleviate the existing human suffering in Yemen.

Tawoos briefs on the needs of a number of health facilities in Sana’a.