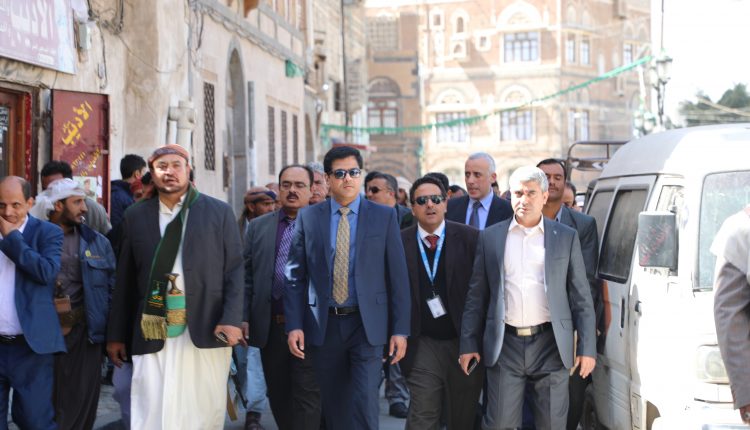 UN delegation visits the old city of Sana’a and Tawoos announces upcoming projects in the capital’s secretariat with more than $36 million.

The Secretary-General of the Supreme Council for the Management and Coordination of Humanitarian Affairs and International Cooperation, Abdel Mohsen Tawoos, Mayor of the capital, Hammoud Abbad, and the Director of the United Nations Office for Project Services UNOPS Muhammad Othman Akram, briefed on the conditions of the water and sanitation network in the old city of Sana’a and the interventions required for maintenance and rehabilitation.

They, in the presence of deputy Minister of Culture Muhammad Haidara and director of UNOPS Fayyad Rasoul, listened to a clarification from the stakeholders in Old Sana’a and the Water Corporation about the catastrophic threats and the dangers of the collapse of the water and sewage network that has expired, and the effects of sewage leakage on some buildings and homes,emphasizing the urgent needs of network to interventions, repair and rehabilitate it.

They were also briefed on the conditions of damaged, collapsed, and dilapidated houses in Old Sana’a due to torrential rains, and their needs for rehabilitation and restoration works to preserve the old city of Sana’a, as it is one of the historical and archaeological monuments classified on the World Heritage List.

The visitors inspected the Sana’a Heritage House in the center of old Sana’a after its rehabilitation and restoration, which was badly damaged as a result of the aggression’s targeting of the historical city.

They got acquainted with the departments and suites of Al-San’ani House, the nature of the work and the services it provides to preserve the Yemeni cultural heritage, raise the level of community awareness, and unify all efforts to preserve this heritage.

Tawoos, Abbad and the United Nations delegation visited the Great Mosque, and learned about the stages of construction, expansion , rehabilitation, and the valuable manuscripts and Qur’anic flakes contained in the mosque’s library, archaeological inscriptions and ancient carpets.

They viewed the permanent exhibition of manuscripts at the Manuscripts House in Old Sana’a, which includes a collection of rare historical manuscripts and books that were discovered during the recent restoration and rehabilitation work at the Great Mosque.

Tawoos explained that the development and service projects to be implemented by UNOPS in the capital secretariat during the year 2022 are estimated at 36 million and 664 thousand dollars allocated to the health, electricity, roads, water, environmental sanitation, and solid materials sectors.

They were accompanied during the visit by the Director of Programs at UNOPS in Yemen Khaldoun Salem, and a number of officials from the Capital Municipality, the Council for Humanitarian Affairs and the Commission for the Preservation of Historic Cities.

Statement of SCMCHA regarding WFP’s announcement of reducing food aid.