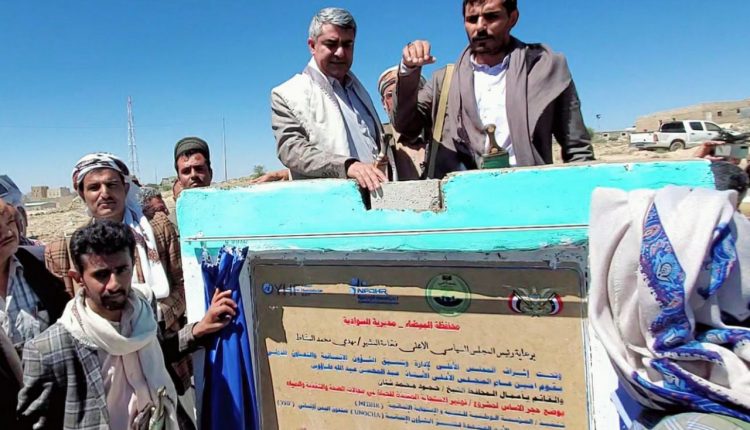 Tawoos lays the foundation stone for projects of more than $1.3 million in Bayda governorate.

The Secretary-General of the Supreme Council for the Management and Coordination of Humanitarian Affairs and International Cooperation, Abdul Mohsen Tawoos, and the First Undersecretary of Al-Bayda Governorate, Hammoud Shathan, laid today the foundation stone for a number of projects in the fields of health, water, food and shelter in Al-Sawadiyah District.

During the laying of the foundation stone, in the presence of the governorate’s deputy, Mutahir Al-Maori, the Executive Director of the National Institution, Mohamed Salah, the director of the district , Yasser Al-Sawadi, the director of the Public Health ,Population Office, Dr. Mujahid Al-Khatri, and Water Corporation Ali Sharif, Tawoos explained the importance of implementing such projects related to the basics of life in the district.

Tawoos confirmeden that SCMCHA will pay special attention to Al-Bayda Governorate during the coming period due to the lack of its districts in infrastructure and the simplest services, indicating that the projects for which the foundation stone has been laid come within the framework of expanding the map of projects in various districts.

The first undersecretary of the governorate appreciated the efforts of the Supreme Council in supporting the local authority to implement projects in a way that contributes to alleviating the suffering of the people of the governorate, pointing to what was included in the emergency needs in various fields,especially health, water and education.

He affirmed the authority’s readiness to overcome difficulties for the organizations to expand their interventions in the various districts and reach the objective .

For his part, the director of the National Foundation branch in the governorate, Dr. Faisal Jarad, affirmed the Foundation’s keenness to provide services and implement projects in various district to alleviate the suffering of citizens as a result of the continued aggression and siege.

He appreciated the cooperation of the local authority in facilitating the implementation of the projects that were implemented during the last period.

The laying of the foundation stone was attended by Deputy Director General of SCMCHA Branch, Abdul Hafeez Al-Maghrabi, Coordinator of Nadara Association Ali Al-Majnihi, and a number of officials.

Tawoos inaugurates the distribution of humanitrian aid in Abdiya district of Marib governorate.