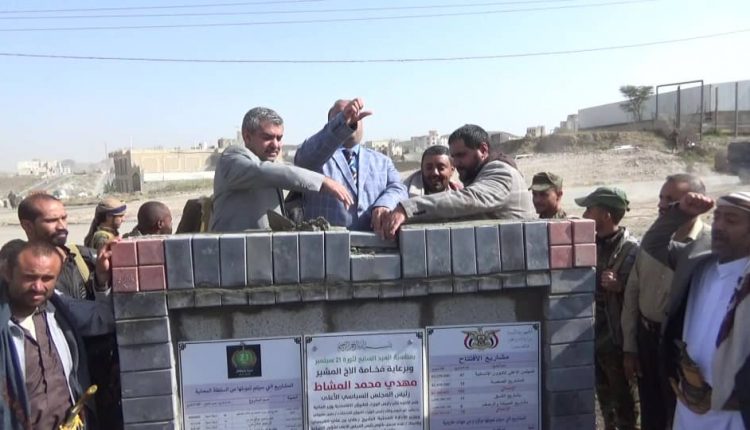 The Deputy Prime Minister for Services and Development Affairs, Dr. Hassan Makbouli, inaugurated and laid the foundation stone, along with the Governor of Sanaa, Abdul Basit Al-Hadi, the Secretary-General of the Supreme Council for the Management and Coordination of Humanitarian Affairs and International Cooperation, Abdul Mohsen Tawoos, and the Deputy Minister of Local Administration, Qassem Al-Hamran, inaugurated 283 projects at a cost of 8billion and 181 million riyals on the occasion of the seventh anniversary for the September 21 revolution.

The projects are distributed among 162 projects funded by the local authority and 121 with central funding and support from external organizations in the sectors of health, water, education, works, construction, urban planning, agriculture, institutional and community building, restoration of archaeological and tourist buildings, and others.

The Deputy Prime Minister, Secretary General of SCMCHS , the Governor of Sana’a and the Deputy Minister of Local Administration in the governorate center also inaugurated work with the equipment of the second phase that was purchased for the sectors of the executive unit in the governorate at a cost of 540 million riyals.

Maqboli appreciated the efforts made by the governorate leadership and the development and service sectors in the completed projects and keeping pace with the needs of the people of Sana’a governorate.

He considered the opening and laying of the foundation stone for a number of projects as one achievement of the glorious September 21 revolution.

While the governor of Sana’a stressed the keenness to keep pace with development work in various fields within the executive plans for the current year and the programs of the local authority to achieve growth and renaissance in projects in conjunction with the victories achieved by the army and the popular committees.

A meeting to discuss cooperation mechanism to control desert locusts.

Al-Hadi and Tawoos inaugurate projects in Hamadan with more than $236,000 .

Discussing ways to provide the needs of Al-Bayda University.