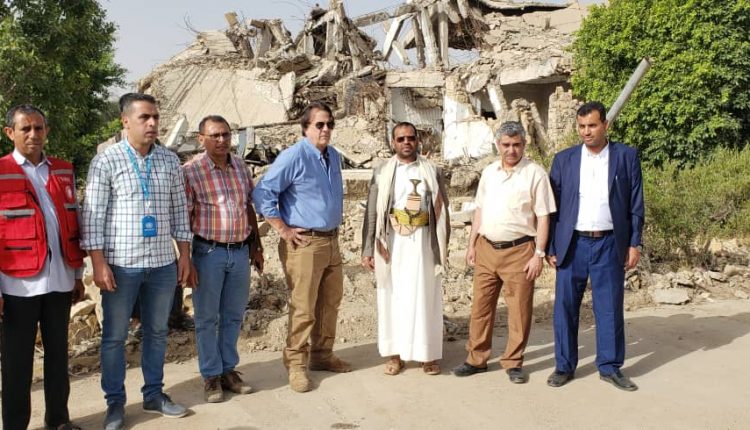 Awad and Tawoos inspect the aggression’s damage to civilian facilities in Sa’da governorate.

Sa’da Governor Mohammed Jaber Awad, Secretary General of SCMCHA Abdul Mohsen Tawoos, and UN Resident Coordinator for Yemen Willem David Gersley were briefed on the scale of the damage of government civilian installations and the old city of Sa’da.

During the visit, Governor Awad explained that the aggression targeted government civilian facilities as well as health and service facilities in the province, which increase the suffering of citizens at various levels.

Awad, Tawoos and Gersley were also briefed on the damage done to the old city of Sa’da as a result of being targeted by the U.S.-Saudi aggression.

Governor Awad stressed the importance of concerted efforts to provide sanitation projects for Sa’da governorate as a priority, complete the restoration of the affected schools and build the totally destroyed schools and furnish them by donors.

The Governor of Sa’da, the Secretary-General of SCMCHA and the Resident Coordinator of the United Nations met with the people of the old city of Sa’da and listened to an explanation of their suffering in light of the continuing aggression.

The people of Sa’da called on to provide the necessary needs such as the implementation of the city’s sanitation project.

During the visit, they were accompanied by The Province’s Undersecretary for Humanitarian Affairs Mohammed Baydan, Deputy Director of the Branch of SCMCHA Hamid Hamel, Head of the Yemeni Red Crescent Society Branch Hassan Al-Mout and officials of the United Nations Office.

meeting to discuss the second phase of rural resilience project in Yemen.