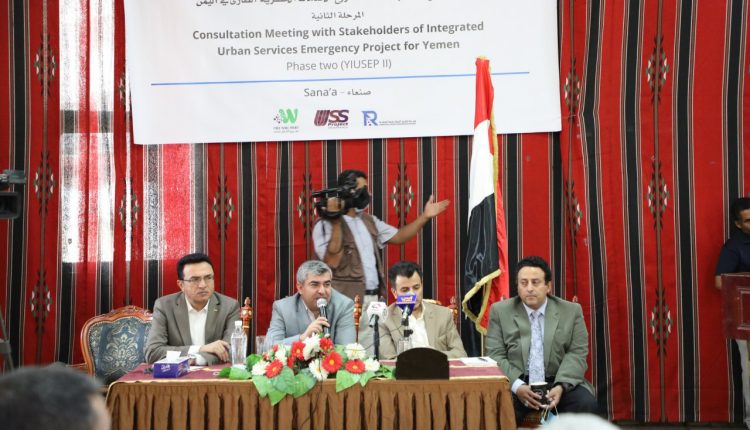 Meeting discusses the implementation of the second phase of the emergency urban services project.

A consultative meeting was held today in Sana’a for stakeholders, institutions and beneficiaries of the UN Emergency Urban Services Programme project in Yemen.

The meeting,organized by SCMCHA with the UNOPS, was discussed the requirements for implementing investment plans and urban projects in accordance with urgent needs and priorities.

At the opening of the meeting, in the presence of the Minister of Health Dr. Taha Al Mutawakkil, Minister of Water and Environment Engineer Abdul Raqib Al-Sharmani, Secretary-General of the Capital Hammoud Obad and Deputy Minister of Education Qassim Al-Hamran, Deputy Minister of Local Administration, Qassim al-Hamran, Dhamar Governor Mohammed Al-Bokiti, and Imran Governor Dr. Faisal Jaman, the Secretary General of SCMCHA Abdul Mohsen Tawoos pointed to the success of the first phase of the urban services project.

Tawoos also appreciated the efforts of UNOPS in the first phase, stressing the importance of coordination to make the second phase a success according to the need plan and its urgent priorities, indicating that six years of aggression against Yemen is enough to illustrate the extent of the damage and the level of need.

He explained that the transition from emergency projects to sustainable development is what characterized the UNOPS projects, confirming the importance of working on the same path to get Yemen out of the humanitarian crisis.

He stressed that such meetings come within the framework of ensuring coordination and consultation with local authorities and relevant authorities to reach common visions that can implement the plans and projects that are put forward to meet the needs of the Yemeni people.

Officer of UNOPS, Khaldoun Mohammed, stressed the importance of coming up with joint action plans that serve the priorities of need and alleviate the suffering according to the available possibilities.

He also appreciated the efforts of SCMCHA in coordinating with stakeholders and facilitating the work of organizations.

In turn, the participants confirmed the importance of such  these meetings in drawing the way of the implementation of projects in order to benefit and alleviate the suffering of the Yemeni people as a result of the continued aggression and the ongoing blockade.
Meeting discusses the implementation of the second phase of the emergency urban services project.

Tawoos briefs on the needs of Haydan District for development projects.