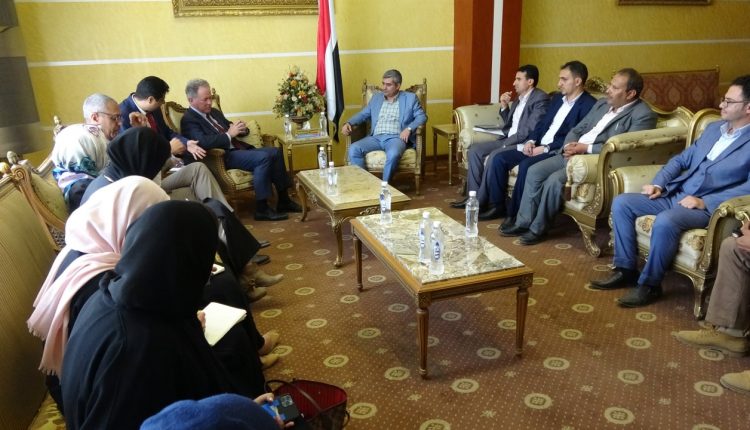 The meeting was in the presence of the head of the international cooperation department of SCMCHA, Mana’a al Asel, head of Single-window Hamza Al-Mukhtar and Head of the Centeral and technical committee- SCMCHA Eng. Anwar Hashem AllahigyAl, reviewed what was accomplished in the cash assistance project “Experimental Biometric Survey” and the misunderstanding that coincided before the implementation of the project.

In the meeting, Tawoos pointed out that everyone is going to implement the project through work and agreements. Indicating that there are errors in the previous database of the beneficiaries and that the need became under the circumstances of aggression is great, which requires care to make the survey successful and correct the mistakes.

He explained that the survey is still in the experimental phase and the work is moving slowly ,so it is necessary to move to the registration stage and speed up this as the delay increases the suffering.

He stressed the importance of speeding up the provision of equipment and funding to complete the survey as the success of the project considers success of WFP.

The Secretary-General of SCMCHA indicated that the reduction of aid in the northern regions has exacerbated the suffering of the beneficiaries, which calls for a review of the disbursement of monthly aid.
He noted that 109 district need emergency assistance on an ongoing basis.

He explained that the aggression has increased the suffering of citizens because of the lack of access to oil derivatives.

“The program also bears great responsibility for the suspension of subsidies for a number of services such as oil derivatives for water and health, causing disaster and worsening the situation significantly,” he said.

Abdul Mohsen added the need is increasing in the absence of oil derivatives, which has doubled the number of needs from 16 million to the overall suffering of Yemenis.
He called on the United Nations, its organizations and agencies to make pressure for the entry of oil derivatives as a priority that humanitarian organizations should work on.

He addressed the importance of finding a radical solution with regard to damaged materials as a sensitive subject and to be a priority.
He confirmed the council’s efforts to enhance confidence and make more efforts to facilitate humanitarian work.

For his part, the Executive Director of WFP indicated that by the end of May, the WFP intends to distribute full aid to level 4 and 5 beneficiaries in addition to what is currently being disbursed.

He confirmed that the proper experimental survey would enable the project to be submitted to donors in order to continue and make the survey a success.

Paisley appreciated level of cooperation and trust between WFP and SCMCHA , enabling it to mobilize funding. Stressing the willingness to address all the problems.

Discussion of the mechanism for receiving IDPs from Marib.

Discussion of public works and road project interventions in the rehabilitation of historic cities.