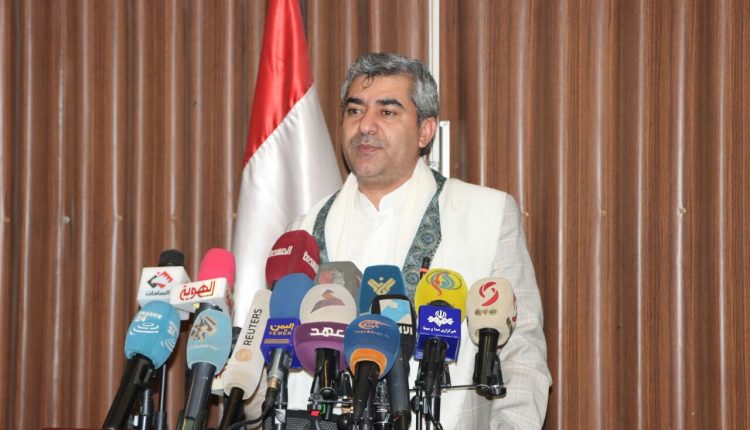 SCMCHA held a press conference today on arrangements to accommodate IDPs from Marib.

At the conference, The Secretary General of SCMCHA confirmed the importance of the local authority and the private sector playing their role towards IDPs from Marib, both from the province and those who are living in this province .

He pointed out that Ament al Asemah , Sana’a and Dhamar are the most concerned provinces in receiving IDPs from Marib governorate.

Tawoos stressed the importance of coordination between those governorates in preparing suitable shelters for IDPs.

He said the council is on alert and ready to stand next to the provincial leadership to provide for the needs of the displaced.
Abdul Mohsen called on humanitarian organizations and UNCHR to support efforts to provide the necessary needs for IDPs from Marib.

He also indicated that he aim of the conference is to see the possibilities and readiness of Ament Al Asemah and Sana’a governorate to accommodate the IDPs and the role of the SCMCHA in this regard,

He pointed out that the IDPs since the beginning of the aggression amounted to 4 million and 996 thousand. “The Yemeni people, who have been in charge of this number of displaced people for six years, will take care of 50,000 displaced people from Marib province,” he said.

Tawoos expressed the hope that UN would play its part in providing safe passages for the exit of displaced people from Marib province.

The secretary of the capital, Hammoud Abad, said the secretariat will do its utmost efforts to accommodate IDPs from Marib province.

He noted that the secretariat’s leadership will work through a joint vision with the Supreme Council to find the basic elements for sheltering displaced persons.

He pointed out that the number of residents in Ament Al Asmeh before the aggression was approximately two million and 500 thousand, while it is today seven million because of the increasing of displacement from different provinces, where the citizens never feel any discrimination .

Abad confirmed the readiness of the local authority in receiving and accommodating the IDPs from Marib and find places and shelters for them. He called for safe passages for displaced people from Marib province to ensure their safety.

He pointed out that Sana’a province will receive IDPs from Marib province as guests, which one of Yemeni people attributes where they have known with tribal brotherhood.

Marib Governor Ali Mohammed Ta’iman expressed his appreciation to SCMCHA and the leadership of governorates for their willingness to accommodate displaced People of Marib.

He indicated that more than 40 displaced families have been detained by the aggression and mercenaries for more than a week in Marib and have not been allowed to reach Sana’a, while many displaced people are still stuck on their way to Sana’a.
Governor Ta’iman called on the United Nations to provide safe passages for IDPs who are under of aggression and mercenaries to reach Sana’a governorate.

Tawoos meets with representative of the IMC.

Discussion of humanitarian situation and the interventions of the OCHA in Yemen.