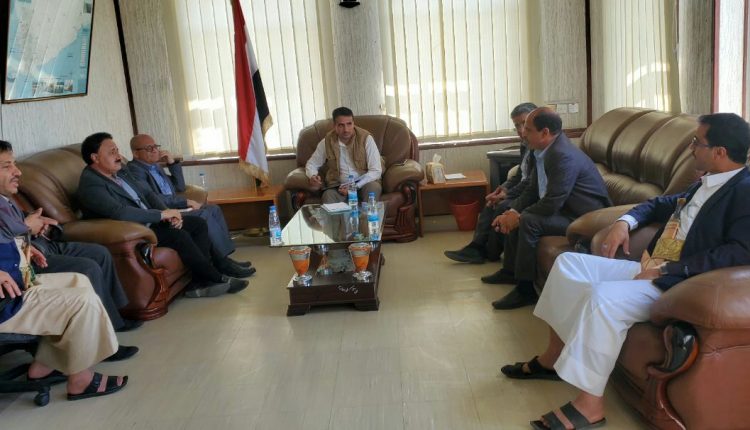 Discussion of the completion of the houses rehabilitation in Old City of Sana’a .

A meeting held today in Sana’a, which included the head of International Cooperation department in SCMCHA, Mana’a al-Asal, and Deputy Minister of Culture Mohammed Haidara, discussed the completion of the project to rehabilitate the houses of Sana’a old city , which is affected by air raids of aggression, floods and rains.

At the meeting, which was attended by The Head of the Planning Department Mutahar Zaid and Chairman of the Historical Cities Authority Mujahid Tamish, Al-Asal explained the importance of coordinating and speeding up the selection of specialists and establishing an appropriate working mechanism for the restoration of houses that affected from leaking before the rainy season in order to reduce the situation in those houses.

He indicated that the plan was being implemented gradually in accordance with the rehabilitation priorities for the preservation of the city’s historic houses.

He confirmed the council’s keenness to do all things in order to preserve the historic city of Sana’a, stressing the need to start quickly and deliberately in the repair and maintenance of the damaged houses.

Al-Asal appreciated the initiative of forming community committees, which will play a positive role in the work of preserving the heritage of the old city of Sana’a.

For his part, the Deputy Minister of Culture explained the importance of implementing the project of renovating the old buildings of Sana’a and starting houses that affected from leakage.

He pointed out the importance of paying more attention to the historical symbolism it represents at the local and global level, indicating the positive role of the community committees that were formed within the framework of the project.

Haidara appreciated the role of SCMCHA and its efforts in coordinating to speed up the implementation of restoration projects for sana’a old City.

Distribution of food baskets for 2,491 families in The Sarwah and Majzer in Marib.

Tawoos discusses with the UNHCR deputy representative the aspects of joint coordination.