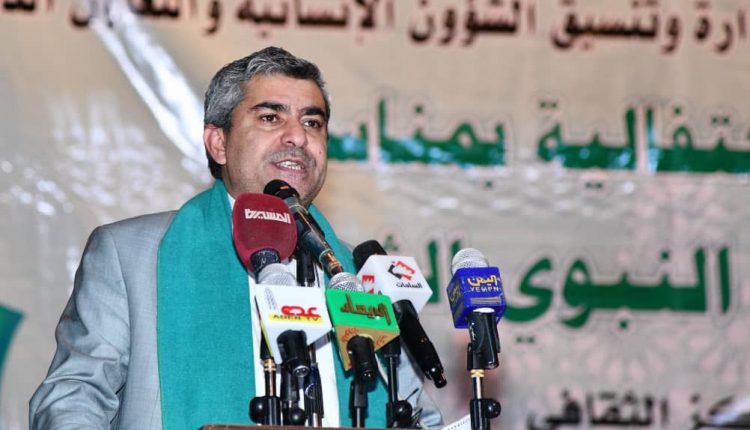 in the presence of official and popular people : SCMCHA organizes celebration of the anniversary of the Prophet’s birth.

The General Secretariat of the Supreme Council for the Management and Coordination of Humanitarian Affairs and International Cooperation organized celebration to commemorate the prophet’s birth.

He added that these anniversary , which are dedicated to the celebration of the prophet’s birthday, are an opportunity to recall and take sermons from the life of the Holy Prophet and his efforts against the arrogant as well the role of Yemeni people in supporting the Prophet and the spread of Islam in most parts of the world.

Maqbooli praised the interaction of the Yemeni people and their participation in this celebration . He stressed the need to mobilize and participate in the central celebrating on the 12th of Rabbi al awwal .

At the celebration, which was attended by the ministers of local administration Ali al-Qaisi and higher education Hussein Hazab, industry and trade Abdul Wahab al-Durra and Secretary-General of the Supreme Political Council Dr. Yasser Al-Hori, Secretary General of the Supreme Council for Humanitarian Affairs Abdul Mohsen Tawoos considered that the celebrating and participating of Prophet birth’s anniversary as well as is a message that the Messenger of God and his values and principles still live among Yemenis.

He pointed to the significance of celebrating this occasion to draw inspiration from the great lessons represented by the birth of the master of humanity and the bearer of the message of heaven in bringing humanity out of darkness into the light.

He pointed to the attempt of the coalition of aggression to break the will of the Yemeni people through the blockade and the continued detention of oil derivatives ships, food and medicines. He pointed out that this will not deter them from celebrating the anniversary of the birth of prophets , regardless of the circumstances and challenges.

Dr. Qais Al-Tal, deputy director of the Office of The Endowments of The Capital Secretariat, reviewed the great implications and meanings of the Prophet’s biography in building the Muslim community.

He pointed out the importance of celebrating the anniversary of his birth to inspire meaning and consolidate it in the conscience of generations to confront the plans that target the nation and its identity of faith.

Dr. Ibtisam al-Mutawakel, head of the Cultural Front for the Response to Aggression, delivered a poem in love with the prophet, and the event also included singing and artistic paragraphs.

The celebration was attended by a number of agents of ministries and provinces.

Discussion of cooperation between the Ministry of Technical Education and the Supreme Council for Humanitarian Affairs.

Tawoos meets the Country Director of Save the Childern Organization.