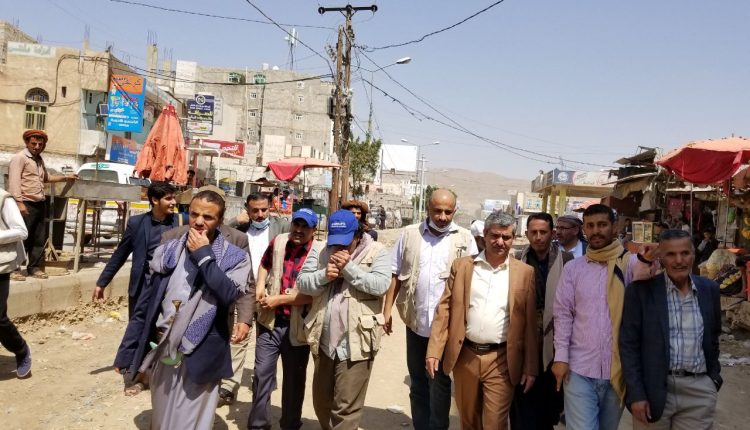 Tawoos and Jaman inaugurate bridges project in The Central road of Omran.

Omran Governor Dr. Faisal Jaman and secretary General of SCMCHA Abdul Mohsen Tawoos inaugurated today the bridges project in the central road of five bridges, in The City of Omran and the implementation of the public works project funded by UNOPS.

Jaman and Tawoos with provincial undersecretary Amin Faras and UNOPS advisor Khaldoun Salem, were briefed on the progress of the project to rehabilitate the Night Market road , and the paving of Nahda and Al-Nasr Street.

During the visit, the Governor of Omran confirmed the urgent need for projects in the fields of roads, sanitation and the support of the Central Hospital of May 22 as well as the Hygiene Fund, praising the projects of UNOPS in alleviating the suffering of the community.

He stressed the completion of road paving projects funded by UNOPS, expressing the readiness of the provincial leadership to provide all facilities for the activities and development programs allocated to the province.

Tawoos said Omran province will receive many development projects. He called for a plan for priority project needs.

They were accompanied during the visit by the directors of the Improvement Fund Sultan Al-Qarahi and the Branch of the General Secretariat of the Supreme Council of Omran, Hamir Al-Sa’ar, and a number of office managers.

Meeting in Omran discusses the needs of development projects for the province.