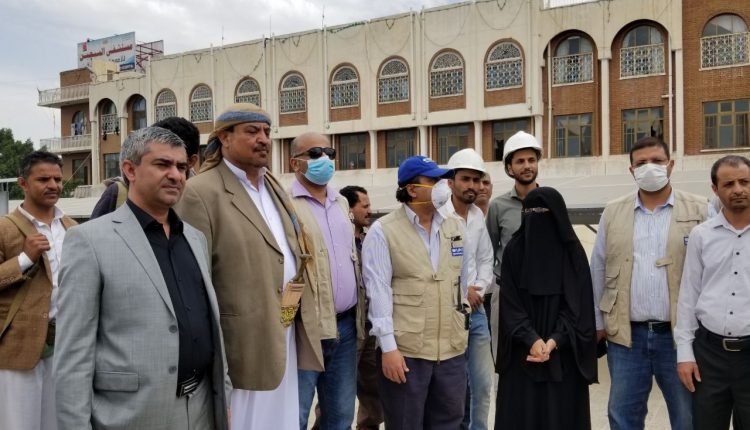 Tawoos and Abad inspecte a number of service projects in the Capital Secretariat.

The Secretary of the Capital, Hammoud Ouabad, and the Secretary General of SCMCHA, Abdul Mohsen Tawoos, inspected the conditions of Al Sabeen hospital for childhood maternity.

They listened from the director general of the hospital, Dr. Magda Al Khatib, to explainaton about the alternative energy operation project, which is estimated at 315 kVa with an actual capacity of 260 kW. The project, which consists of 832 panels and 13 expandable inlets, will contribute to the hospital’s electricity supply, she said.

The hospital’s electricity consumption is about 420 kilowatts per day. She praised the role and efforts of the leadership of the Capital Secretariat, donors who supported the hospital to develope the medical services that provides to women and children.

In addition, the Secretary of the Capital, the Secretary General of the Supreme Council, and the Programme Advisor of the United Nations Office inspected the work of the rehabilitation and maintenance project of the old Street of Al Dary.

They heard from the project engineer an explanation about the work being carried out in the development of an asphalt leveling layer on Al Cairo Street with an area of 3,500 square meters from the Al-Sinbani tour to the Cairo Street tour.

The project engineer explained that these works are part of rehabilation and maintenance of Al Dairy Street that costs 750 million Riyal .

They also looked at the environmental situation in Sawd Hinsh and the possibility of completing the sanitation network project, which is approximately 250 meters long.

The first and second phases of the project to deliver sanitation to The Sawad Hinch, which targeted connecting about 150 homes to the network and serving 15,000 people, were implemented, the capital’s secretary said.

He stressed the importance of the interventions and the supporting of (UNOPS) to complete the implementation of the project to contact sanitation network to all houses overlooking the Sawad Hansh of Al Thawrah district to reduce the spreard of epidemicsI and disease .

Abad praised the support and interventions of (UNPS in the implementation of service and development project in various filed by the Secretariat direction , which contribute effectively to improving the service providing to citize.