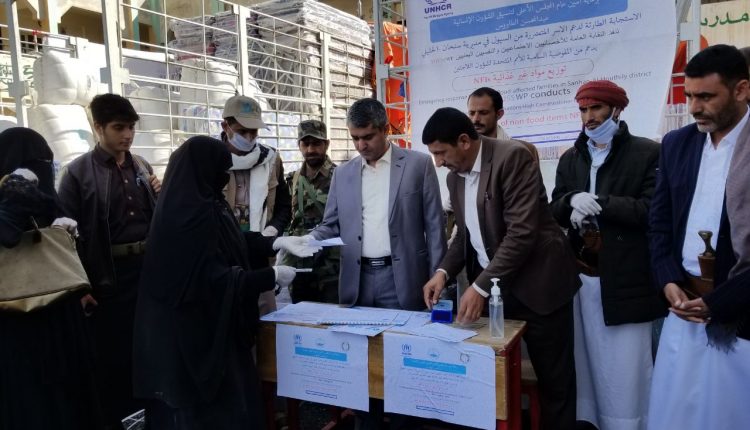 Distribution of residential aid of affected by floods in Sinhan District

The Secretary General of the Supreme Council for the Management and Coordination of Humanitarian Affairs Abdul Mohsen Tawoos, in the presence of the Director of the General Secretariat of the Council in Sana’a Province Abdul Al-Moin Al-Sharif, launched today the distribution of residential  aid and tools for families affected by rain floods in the southern district of Al-Batha in Sanhan district.

The Secretary General of the Supreme Council for Humanitarian Affairs said that the Yemeni people are suffering as a result of the aggression and the blockade, which has been unable to provide many needs under normal circumstances, and if citizens are exposed to an emergency situation such as the damage caused by the floods during the past two days, the response must be swift and urgent to alleviate the suffering and provide a helping hand in what can be provided under the available and possible.

He noted that al-Batha area in Sinhan district is one of the areas where more than 400 families have been affected, streets have been drained and blocked with sand, some houses have been demolished , sanitation has been severely affected and the situation represents real suffering.

He explained that the rescue government is required to come down to inspect the situation and to work at a high and emergency pace to provide services, open water channels and repair what can be repaired.

He stressed the importance for organizations to work in providing assistance and support, as well as the emergency fund, which has much support to be directed to alleviate the severity of this disaster.

He pointed out that the Council and its branches try hard to provide emergency assistance, but it does not work,as well as everyone must cooperate ,join efforts and strengthen the level of coordination with the relevant authorities in order to alleviate the suffering of citizens.

meeting discusses prisoners’ requirements to the respond of COVID19.