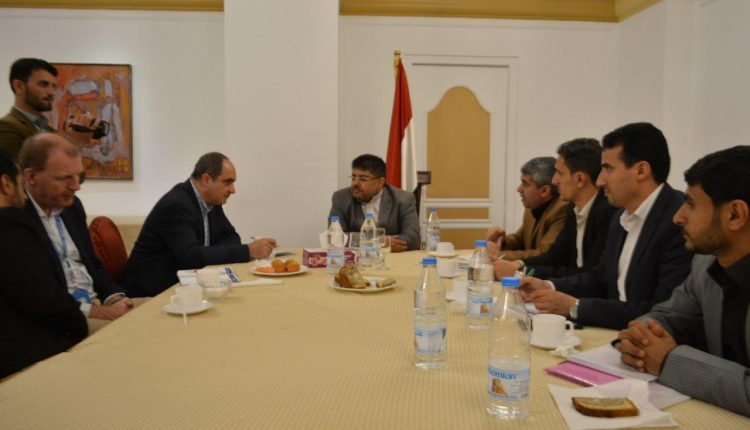 Al Houthi and Tawoos meet with the regional director of the UN Office.

Mohammed Ali al-Houthi met today with regional director of the United Nations Office for the Coordination of Humanitarian Affairs for the Middle East and North Africa (OCHA), George Khoury.

At the meeting, which was attended by the Secretary-General of the Supreme Council for the Management and Coordination of Humanitarian Affairs, Abdul Mohsen Tawoos, and the Director of the OCHA Office in The Right Aidan O’Leary. Al-Houthi welcomed George Khoury, in Yemen.

For his part, Secretary General of the Council of Humanitarian Affairs Abdul Mohsen Tawoos welcomed George Khoury and Ulysses.He also stressed the impotence of implementing all that has been agreed previously to move forward in the field of humanitarian work and promote it in order to achieve the common goal of providing service to the needy and the most affected.

The meeting also stressed theimpotence of pushing specialized organizations to participate effectively to cope with epidemics and diseases such as malaria, dengue fever and chikugunya, as well as working to provide the necessary needs for the Clean-up and Improvement Fund in all provinces to reduce the spread of epidemics and diseases.

The meeting discussed the joint mechanism of action between the Council and OCHA to implement all the agreements signed and to speed up the implementation of the MCLA multi-sector survey project to be able to assess needs according to the actual reality of the need.

George Khoury stressed the UN’s commitment to work hard and transparent in various humanitarian aspects in coordination with the relevant national authorities to alleviate the suffering of Yemenis.

Discussion of mechanisms to strengthen humanitarian action in Hajjah governorate.