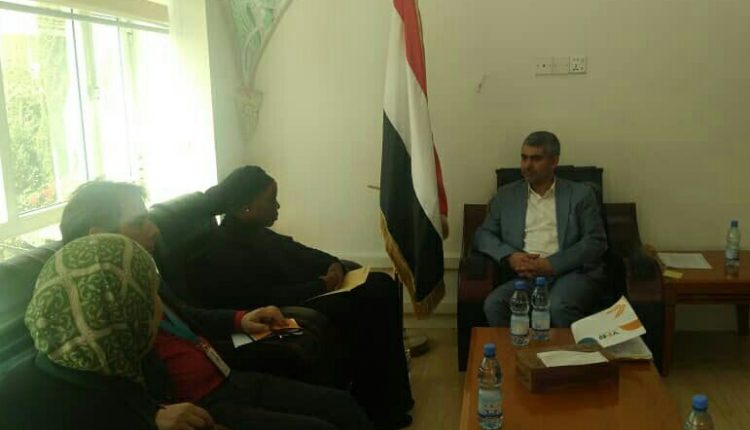 The Secretary-General of the Supreme Council for the Management and Coordination of Humanitarian Affairs (SCMCHA) Abdul Mohsen Tawoos met today with UNICEF representative Sarah Nyanti.

At the meeting, which was attended by Hamza al-Mukhtar, head of the one-window department and UNICEF deputy representative Bastian Viño, Tawoos stressed the importance of continuous efforts, especially in areas that require intensified humanitarian activity such as Hodeidah, where many epidemics and diseases are rampant and need continued health and human support.

He stressed the need to accomplish what has been agreed upon, especially with regard to surveys through which the actual need can be determined according to priorities.

He expressed regret at the allegations made by some organizations that the Council had obstructed such surveys. He pointed out the importance of coordination with the Supreme Council, which is the only way for organizations to communicate with different entities.

“This coordination will facilitate the work of the organizations and support their efforts in the humanitarian field, which represents the common goal, thereby alleviating the suffering and humanitarian disaster facing the Yemeni people as a result of the aggression,” he said.

The Secretary General of the Supreme Council for Humanitarian Affairs also confirmed that the Council is concerned with solving problems and developing remedies to overcome the challenges and facilitate the tasks of organizations operating in Yemen.

For her part, the UNICEF representative confirmed the organization’s efforts to continue to provide more humanitarian support. UNICEF is keen to coordinate and communicate in order to ensure that humanitarian-related problems in Yemen are overcome.

Tawoos : The threat to stop humanitarian aid is a political card blackmail Yemenis.