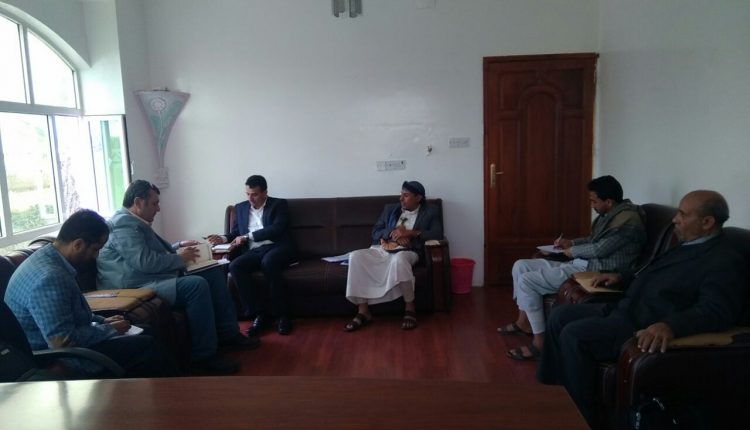 A meeting of the Supreme Council for The Management and Coordination of Humanitarian Affairs (SCMCHA) today discussed the problem of Yemeni students to be evacuated from Wuhan City of China.

In the meeting, which included the head of the Department of International Cooperation, Manaa al-Asal, acting planning department Mutahar Zeid, deputy head of the Department of International Cooperation Ali Al-Kahlani and the Coordinator of Relations at the United Nations Office for the Coordination of Humanitarian Affairs (OCHA) Dr. Najib al-Mansour and the representative of the World Health Organization (WHO) Ihab Khoury, the options for evacuating Yemeni students, and clarifications about not receiving responses to the speeches that were officially sent to see what could be offered to Yemeni students in Wahan.

The head of the Department of International Cooperation, Mana al-Asal, explained that the issue of the evacuation of Yemeni students is a matter of morality and humanity in the first place and it was the duty of the United Nations to play this role especially that Yemen under blockadeby the countries of aggression, led by Saudi Arabia, which claims to serve the people Yemen did not bother to evacuate Yemeni students while it sent a private plane to evacuate a number of its Saudi students from the Chinese city of Wuhan.

He pointed out that the envoy of the Secretary-General of the United Nations, the representative of the World Health Organization and the Coordinator of Humanitarian Affairs in Yemen were addressed to quickly take the necessary procedures to ensure the evacuation of Yemeni students from Wuhan airport to Sana’a International Airport with the necessary health precautions in coordination with the Ministry of Public health and population and there was no reply on those speeches.

He stressed the need for the United Nations and the World Health Organization (WHO) to do their humanitarian duty to Yemeni students and to send a UN plane to evacuate them from Wuhan city to Sana’a airport as soon as possible as a moral and humanitarian duty.

For their part, the Coordinator of Relations of the Office of Humanitarian Affairs (OCHA) and the representative of the World Health Organization (WHO) confirmed that they will submit what has been discussed to their officials and will respond as soon as possible.